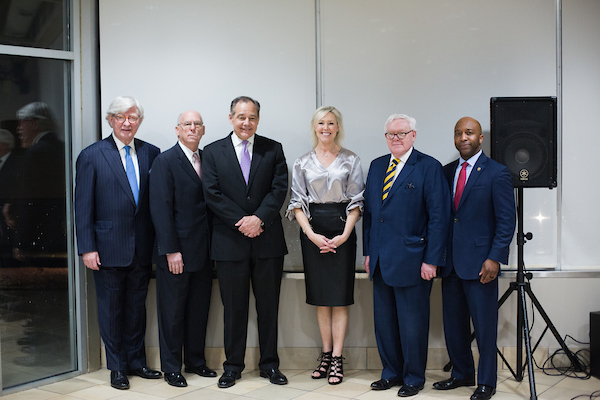 The Distinguished Alumnus Award is given to a Cumberland School of Law graduate who has distinguished himself/herself in the practice of law, service to the community, and leadership in the profession.

Very few people have exhibited the level of ethical and moral responsibility, devotion to their profession, and sense of duty to his/her community and country, than Charles Ingram has. Raised in rural Duplin County, North Carolina, Ingram attended the University of North Carolina (UNC) and was the president of his class of 1970. Forty-nine years later, he continues to serve UNC by participating on its prestigious Board of Visitors. After college, Ingram became a naval officer earning numerous and impressive accolades for his leadership. Ultimately, in 2000, upon his retirement as captain, the president of the United States awarded him the Legion of Merit, the Navy’s second-highest peacetime award.

Ingram epitomizes the highest ideals of the legal profession. His passion and sincerity is evident not only by a very long list of leadership roles he assumed in local and state bar associations, but by the meaningful work he accomplished and his impeccable legal representation. His work ethic may be unmatched. Ingram is a life member of the Multi-million Dollar Advocates Forum, he has been honored by The National Trial Lawyers, and is certified by the National Board of Trial Advocacy in Civil Trial Law. As significant, much of his time has been spent mentoring and teaching young lawyers during the course of his 41 years in practice.

As exemplary as his accomplishments in the practice and profession is his service to the community. Not only was he elected or appointed to various roles in local and state government, but he is widely recognized as an expert in the history of Duplin County and vitally interested in racial fairness. When he was president of the Duplin County Historical Society, he was honored by the Duplin County Martin Luther King Jr. Commemoration Committee with its I Have a Dream award. Since 2007, Ingram researched, documented, and raised money by dedicating granite memorials to the men from Duplin County who died serving in World Wars I and II, and the Vietnam and Korean Wars. To further honor these fallen men, he plans to publish books containing his research and biographies of each. His work continues in the research of the Duplin County patriots who fought in the Revolutionary War, and other public service projects.

By his side before law school, during law school, and practicing by his side since 1979, is his wife, Carolyn Ingram. A legal scholar and superb advocate herself, Carolyn taught classes at Cumberland from 1976-1978. They are among the first husband and wife duos to be honored by the North Carolina Bar Association by receiving the bar’s Citizen Lawyer Awards.

Young Alumnus of the Year: Ricardo A. Woods ’04

The Young Alumnus of the Year award is given to a Cumberland School of Law graduate who received his/her J.D. within the past 15 years, and who has distinguished herself/himself in the practice of law, service to the community, and leadership in the profession.

While in law school, Ricardo A. Woods excelled on the National Trial Team and served as chief judge of the Trial Board. He gained skills propelling him into a successful private practitioner and community servant. Woods has a litigation defense practice as a partner at Burr & Forman in Mobile, Alabama, and spends an equal amount of time serving as chief legal counsel and city attorney for the City of Mobile. In his capacity as city attorney, Woods manages all of the city’s outside counsel, serves as chief legal adviser to the executive branch of the local government, and serves as the executive director of the City of Mobile’s internal legal department. Woods also serves on Burr & Forman’s Executive Committee.

Outside the practice, Woods is an active member of Defense Research Institute (DRI) serving on the Diversity Committee, the Government Liability Committee, and Toxic Tort and Environmental Law Committee. Furthermore, serving as a leader in the nonprofit community is important to Woods. He was the president of 100 Black Men of Greater Mobile Inc.; chairman of Mobile United; president of the Vernon Z. Crawford Bay Area Bar Association, the local affiliate of the National Bar Association (NBA); chairman of AL.com’s first Gulf Coast Young Professional’s Summit; and chairman of Prichard Preparatory School.

The Volunteer of the Year recognizes an alumnus/alumna who has demonstrated exceptional loyalty and commitment to Cumberland School of Law through volunteer service to the school.

As the chief magistrate judge for the Northern District of Alabama, Judge John E. Ott not only spends long days on the bench, but he also carries a significant amount of administrative responsibility for the court. Nonetheless, he has consistently taken time to volunteer at Cumberland School of Law to serve law students and professors.

Over approximately the last 20 years, Ott has served as an adjunct professor in Basic Skills (a trial advocacy course), volunteered to judge numerous advocacy competitions, presented during Cumberland’s continuing legal education seminars, participates in the Judge James Edwin Horton Inn of Court (Cumberland School of Law chapter), served as president of the Inn of Court, and always makes himself available at a student or professor’s request.

Prior to his role on the federal bench, Ott served as an assistant U.S. attorney for 15 years.

The Friend of Cumberland award recognizes a person, who though not a graduate of Cumberland School of Law, has contributed time and resources to enhance the quality of the law school and the educational experience of the students.

His article on the utilization of magistrate judges in the federal district courts in Alabama was published in the 1997-1998 edition of the Cumberland Law Review. In addition, Putnam participates in Cumberland’s continuing legal education seminars, the Judge James Edwin Horton Inn of Court (Cumberland’s chapter), and is always willing to assist as a judge during advocacy competitions at the law school.