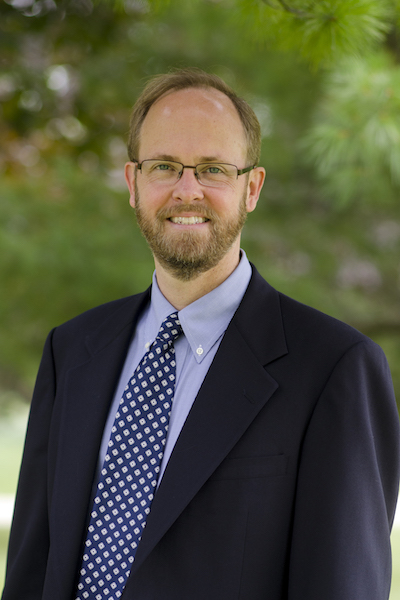 Samford University is pleased to announce the appointment of Douglas A. Sweeney as the second dean of Beeson ­Divinity School, effective July 1, 2019. The appointment was announced April 5 by Samford Provost and Vice President for Academic Affairs J. Michael Hardin.

A world-renowned scholar of American theologian Jonathan Edwards, Sweeney comes to Beeson Divinity from Trinity Evangelical Divinity School in Deerfield, Illinois, where he is the Distinguished Professor and Chair of Church History and the History of Christian Thought and founding director of the Jonathan Edwards Center. His appointment follows a national search to replace Timothy George, who is retiring as dean at the end of the current academic year.

Having served on Trinity’s faculty since 1997, Sweeney was the founding director of the Carl F. H. Henry Center for Theological Understanding at Trinity, 2000-2012. As director, he raised nearly $4 million for the center, supervised staff, collaborated with boards, and hosted conferences and lectures. Prior to his tenure at Trinity, Sweeney served at Yale University, where he edited The Works of Jonathan Edwards and was a lecturer in church history and historical theology.

“Dr. Sweeney brings together internationally renowned scholarship, academic administrative experience and a deep love and commitment to the Church of Jesus Christ,” Hardin said. “In addition to exceptional academic credentials, Dr. Sweeney also possesses a humble spirit and a servant’s heart which make him uniquely qualified to lead Beeson Divinity School in its next chapter.”

Sweeney also is an award-winning author, with his book Edwards the Exegete: Biblical Interpretation and Anglo-Protestant Culture on the Edge of the Enlightenment, having been awarded a Henry Luce III Fellowship in Theology (2014-15) and named one of the 2018 “Books of the Year” by Moore Engaging of Two Cities Ministries. He is the author and editor of more than 20 books, five of those forthcoming, from prestigious publishers, including Oxford University Press, Yale University Press, Eerdmans Publishing Company, Baker Academic and InterVarsity Press. His prolific writing ministry also includes numerous academic articles, papers and book chapters.

Gary Fenton, retired longtime pastor of Dawson Memorial Baptist Church, Birmingham, and senior advancement officer at Samford, is delighted by Sweeney’s appointment, having personally benefited from his book, The American Evangelical Story: A History of the Movement.

“Dr. Sweeney is an outstanding evangelical scholar, who is committed to excellence of the mind, spiritual depth and Christ-like passion,” he said. “He is an excellent choice to build on the solid and theological rich foundation that Dean Timothy George has provided for this school. I am so grateful for the school’s past and excited for its future.”

In addition to his work at Trinity, Sweeney serves on the advisory board of H-AmRel: History of American Religion and on the editorial boards of Didaktikos, The Works of Andrew Fuller and Congregational Bulletin. Sweeney is also an active member of St. Mark Lutheran Church, an evangelical Lutheran church affiliated with Lutheran Congregations in Mission for Christ, serving as both an elder and vice president. He is a longtime Sunday School and Bible teacher, whose ministry extends beyond the Lutheran Church into Baptist, Methodist, Presbyterian, Evangelical Free and many other churches.

President and editor-in-chief of The Alabama Baptist, Beeson alumna and search committee member Jennifer Davis Rash believes Sweeney will represent Beeson Divinity School well to churchgoers across Alabama and the nation and will win the hearts of many.

“Dr. Sweeney is a solid evangelical and theologically sound leader who is ready to tell the world why students interested in seminary should consider Beeson first,” she said.

“Dr. Sweeney is ideally prepared to provide wise, visionary leadership for Beeson Divinity School. His commitment to the relevance and authority of Scripture, his strong record of scholarship, his devotion to equipping those called to ministry and his engaging, irenic spirit will serve him—and Samford—well in the years ahead,” he said. “We welcome him and his wife, Wilma, to Birmingham.”

"I consider it a great honor and privilege to serve as the next dean of Beeson Divinity School. I have long been an admirer of Dean Timothy George, and think that Beeson is the best-conceived and cultivated divinity school in all of North America,” said Sweeney. “My approach to theological education meshes well with Beeson’s guiding confessional documents, academic culture and personal approach to teaching and mentoring students. In fact, for me, moving to Beeson is like moving to a school that was designed to facilitate the kind of academic work, ecumenism and ministry I have done all my life. These are exciting times in which to serve the Lord together at Samford. Please pray with me that God will guide us firmly into the future."

George is pleased to welcome Sweeney as his successor.

“I am absolutely delighted at the choice of Dr. Doug Sweeney to be the next dean of Beeson Divinity School. He brings to this role superb scholarly credentials along with a deep love for Jesus Christ, the Holy Scriptures, the Lord’s church and God’s mission in the world,” he said. “The future of Beeson Divinity School is as bright as the promises of God, and I look forward to welcoming Dr. Sweeney as our friend, colleague and leader.”