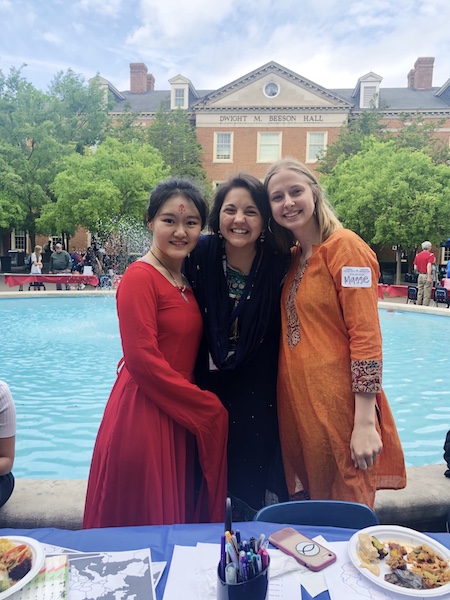 Samford students on Ben Brown Plaza were recently able to get a small taste of different cultures just by filling a plate at the annual Global Connections and Samford Abroad Fair.

Countries across the globe were represented at the fully student-led event offering multi-cultural experiences in food, performances, and activities. The Global Engagement Office partnered with multiple student organizations including the Student Government Association and International Club to bring the event to life.

“Over the course of the semester, four different planning meetings took place as students volunteered to serve on their committee of choice, including off-campus restaurants, on-campus dining, performances, decorations, logistics and publicity. Each committee was led by either an International Ambassador or an International Club member,” Alexis Whiting, study abroad advisor for the Global Engagement Office, said.

“The goal of the Global Connections and Samford Abroad Fair is to increase cultural education among our students by bringing some of the world’s cultures to campus while simultaneously inviting students to experience these cultures first-hand through study abroad,” Whiting said.

Junior Chris Shelling attended the fair for the first time.

“I really liked trying all these different types of food that I’ve never been introduced to before,” Shelling said.

For freshman Maddie Goldberg, attending the event was the kick-off to her new role as an International Ambassador and preparation for her upcoming study abroad trip to Seville, Spain.

“I think that education specifically abroad, not just the tourism aspect helps you grow and become more sensitive to other cultures in a way that when you’re young and in college can allow you to take that knowledge further,” she said.