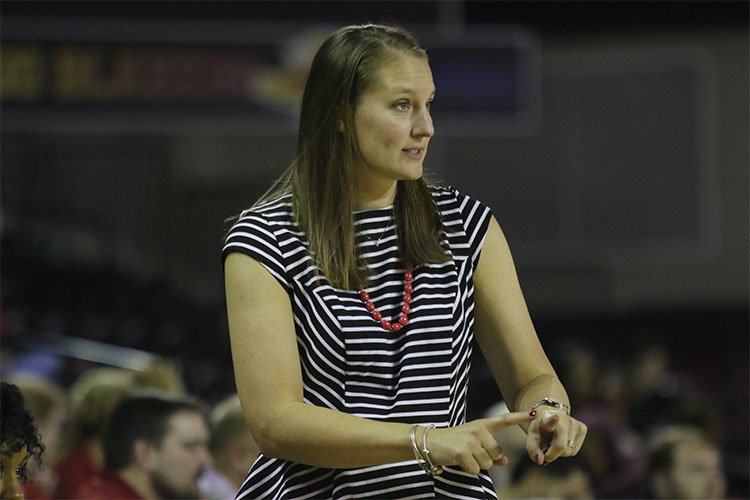 “Replacing someone like Mike Morris is never easy but he did provide us with a blueprint of what we were looking for in our next head women’s basketball coach,” Director of Athletics Martin Newton said. “We wanted someone that understands and promotes the Christian mission of our university. Someone who has a proven track record for academic success, who cares deeply about developing the whole student-athlete both on and off the court, and someone that wanted to establish roots on our beautiful campus and in the city of Homewood.  We found the perfect candidate to fit those criteria in Carley Kuhns.

“Everyone we talked to about Carley had nothing but glowing recommendations about her character, competitive yet compassionate demeanor and her ability to recruit and coach at the highest level,” Newton said. “We’re excited about adding Carley, her husband Matt, and their three daughters, Carsten, Kyler and Cohen, to our Samford family and look forward to the next chapter of Samford women’s basketball.”

Newton also praised several members of the Samford staff and faculty who helped in the process of finding a new head coach.

“I’d like to thank our search committee of Michelle Durban, Mike Morris and Joe Davidson for their tireless efforts in helping throughout this process,” Newton said. “I’d also like to give a special thanks to Drs. Emily Hynds and Denise Gregory for their input and guidance. Samford is blessed to have such caring and passionate faculty and staff to lend a hand when needed.”

Kuhns comes to Samford after spending the last three seasons as the head coach at Valdosta State University (VSU). In her three seasons at VSU, Kuhns posted a record of 66-29. She led her teams to two NCAA Tournament appearances, including a Sweet 16 appearance in 2018 and one Gulf South Conference Tournament title in 2017.

“I am thrilled and excited for this next chapter in my career and incredibly grateful to President Westmoreland and Mr. Newton for this opportunity to lead Samford women’s basketball,” Kuhns said. “After being on campus and meeting a lot of people here, I knew instantly this was somewhere I could see myself coaching. Samford is a special place and offers a unique opportunity for student-athletes to excel in every facet of life. My staff and I will work hard to help our student-athletes become the best people, students and athletes they can be during their time here, and to help prepare them for life after graduating from Samford!

“I would also like to thank Valdosta State University for three amazing years,” Kuhns said. “It’s been an honor and a privilege to coach at my alma mater and VSU will always hold a special place in my heart.”

Her 2018-19 squad finished with a record of 21-10 overall and 16-6 in GSC play. The season marked her third-straight 20-plus-win season. The team reached the finals of the GSC Tournament for the second time in her three seasons at the helm of the program.

In Kuhns’ second season in 2017-18, she led the Lady Blazers to a 23-9 record in the regular season, and 15-5 in conference play. VSU made an impressive run in the NCAA Tournament, reaching the Sweet 16.

Under Kuhns' leadership, the 2016-17 season produced VSU's first 20-plus win campaign since 2011 (22-10) and the first NCAA South Regional Tournament appearance since 2010. Kuhns and the Lady Blazers claimed the program's first Gulf South Conference Tournament Championship since 1984. At the conclusion of the 2016-17 season, Kuhns was named the GSC Coach of the Year.

Kuhns, a 2015 Valdosta State Athletics Hall of Fame inductee, took over at VSU following a six-year stint as an assistant coach at Belmont. While with the Bruins, she helped lead the program to an Ohio Valley Conference Championship in 2015-16 and the program's second NCAA Tournament appearance in the history of Bruin Basketball. During Kuhns' tenure at Belmont, she participated heavily in the program's recruiting efforts, and five of her recruits earned All-OVC recognition. In addition, Kuhns served as an academics and compliance liaison while also adding contributions with scouting, team workouts, camps and the training of perimeter players. Her efforts helped lead the Bruins to a 24-9 record in 2015-16.

Kuhns joined the Bruins’ coaching staff after completing a two-year graduate assistantship at Valdosta State. While with the Lady Blazers, she assisted with various components of the program.

Kuhns was a student-athlete at Valdosta State from 2004 through 2008, earning multiple honors, including becoming the first Lady Blazer since 2001 to be named a Kodak/State Farm WBCA Honorable Mention All-American. She scored 1,133 career points, the 16th-most in program history and was a two-time First Team All-Gulf South Conference selection. Her 262 three-pointers earned her the school record in the category and placed her fifth all-time in Gulf South Conference history.

The illustrious playing career of Kuhns also helped VSU earn a trip to the NCAA Division II Sweet 16 during her senior campaign with a 26-6 overall record. She led the team in scoring, averaging 10.4 points per game, and tallied a .373 shooting percentage from three-point range that season. In her career, Kuhns also accumulated 436 rebounds, 247 assists, 35 blocked shots and 245 steals.

In 2010, Kuhns was named to the prestigious Gulf South Conference All-Decade Second Team for her stellar career on the hardwood at Valdosta State.

Kuhns earned her bachelor's in physical education from Valdosta State in 2008 and completed her master's in higher education leadership in 2010. She and her husband, Matt, who also played basketball at Valdosta State, have three daughters, Carsten, Kyler and Cohen.