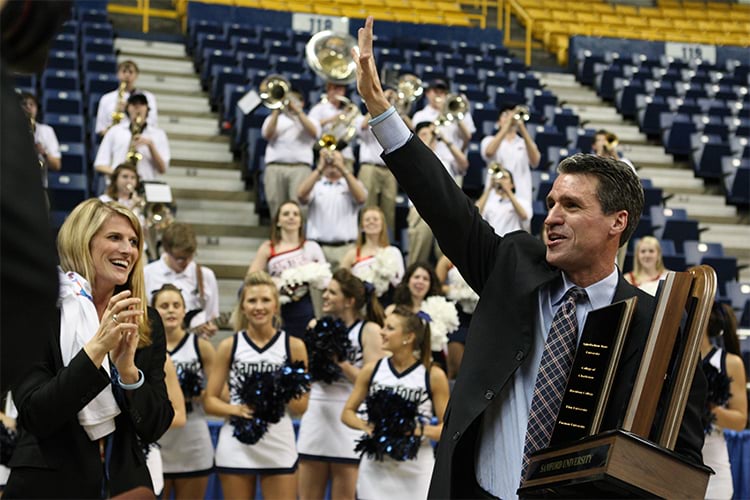 After 25 years at Samford University, including the last 17 as the head women's basketball coach, Mike Morris recently announced his retirement from coaching.

In his 17 years as Samford's head women's basketball coach, Morris became the program's winningest coach with 279 career wins. Morris led the program to the only seven 20-win seasons in program history. Morris' 2011 and 2012 teams won Southern Conference Tournament titles and earned NCAA Tournament bids. He led his squads to three-straight national postseason tournaments, including the 2010 WNIT where the Bulldogs earned a first-round win over Ole Miss in the Pete Hanna Center.

"Samford University owes Mike Morris a deep debt of gratitude for all he's done for the University and both our women's and men's basketball programs," Samford Director of Athletics Martin Newton said. "When Mike informed me he was thinking of stepping down as our women's basketball coach to pursue other interests, I couldn't help but reflect back to my very first day on the job back in March of 2011, watching his women's basketball program compete in Auburn, Alabama, in their first ever NCAA tournament. At that time, I did not know Mike well but recognized what a tremendous coach and leader he was. It didn't take long for me to realize the tremendous impact he had on our university, athletic program and student-athletes. Mike embodies the Samford spirit and will be sorely missed. We wish Mike, Melanie, Peyton and Paige all the best in their future endeavors and are beyond blessed to call them family."

In Samford's 11 seasons as a member of the Southern Conference, Morris' teams posted a record of 110-78 in league games. His teams went 13-9 in SoCon Tournament games, including three-straight championship game appearances from 2010 to 2012, and two tournament titles. The Bulldogs reached the semifinals of the SoCon Tournament seven times during his tenure. Morris was named the SoCon's Coach of the Year in 2009, and the Ohio Valley Conference's Coach of the Year in 2006.

Morris coached 14 All-SoCon players, including one SoCon Player of the Year, Emily London in 2011. Three of his players earned All-OVC honors as well. He coached eight of the top 10 scorers in program history, including seven of the eight players who have scored over 1,000 career points.

"I'm very thankful for all of the players and coaches that have been in our program," Morris said. "Each player and each coach has definitely had a huge part in the success we've had over the last 17 years. I'm so thankful to Martin Newton and President Westmoreland for their leadership and for how they've always supported women's basketball, all the way up to me wanting to retire.”en

Prior to becoming the head women's basketball coach at Samford, Morris spent eight seasons as an assistant coach on the Samford men's basketball staff under head coaches John Brady and Jimmy Tillette. While working with the men's team, Morris served as the team's top recruiter and was instrumental in both Samford Trans America Athletic Conference (now Atlantic Sun) championship seasons and NCAA Tournament appearances in 1998-99 and 1999-2000.

"This university and this athletics department have been absolutely wonderful to my family and me," Morris said. "Melanie and I just believe that this is the time to step away and go in a new direction. I believe God is going to use us in a different way, and that is what we are excited about, but it's also sad to step away after 25 years and leave a tremendous group of young ladies and a tremendous University. I'm excited about the future of the women's basketball here at Samford, and am very thankful for all of the young ladies and staff that have contributed over the last 17 years."

Before his arrival at Samford in 1994, Morris served for three years as an assistant coach under veteran coach Lenny Acuff at Belhaven College. He coached at Belhaven for two seasons before joining Acuff's staff in 1993 at Berry College in Rome, Ga. In his first year at Belhaven, the Blazers finished with the most wins in nine years, compiling a 17-16 record. The next year, Belhaven went 18-15 and hosted the first round of the NAIA District Playoffs for the first time in 20 years.

"We will open an immediate search for our next head women's basketball coach," Newton said. "I am thankful to Mike for assisting in this process and am confident we will find the right person to lead our program into the future."

"This job demands excitement and enthusiasm, and a passion that, honestly, I don't quite have right now, but I know the new coach will," Morris said. "This program deserves that, and this is a really exciting time for them with new leadership and a new direction. I really appreciate Martin allowing me to be a small part of the process of hiring a new women's basketball coach."

Morris is married to the former Melanie Nix of Huntsville, Alabama. They have two grown children, Peyton and Paige.