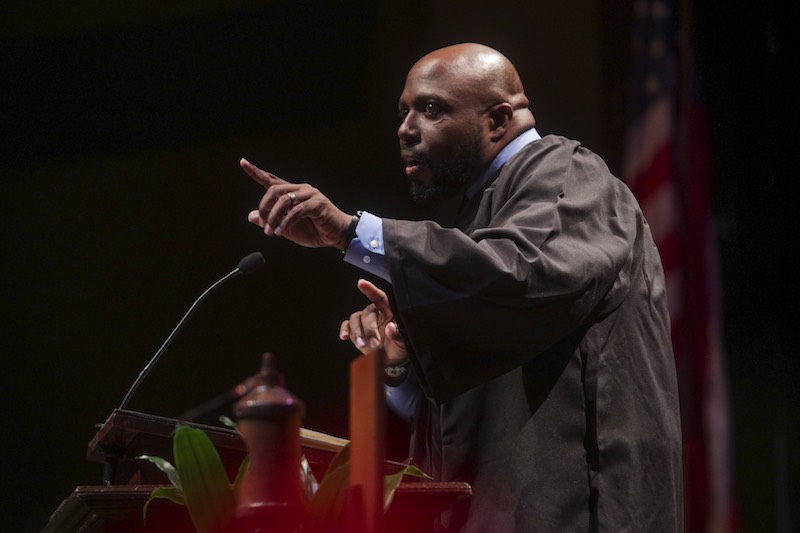 Samford University’s School of the Arts and Orlean Beeson School of Education graduates and families packed the Wright Center for the joint commencement that also marked the final ceremony of the week’s celebration of all 1,277 spring graduates.

Jerell Horton, a 2000 alumnus of School of the Arts, served as this year’s commencement speaker. Known for his “Hortonisms,” he encouraged students to change lives and take advantage of the “buffet before them.” He challenged the graduates, “Be leaders that act as fertilizers and not bulldozers, by providing conditions favorable for change.” He concluded his address with a final message after a moving musical interlude, “You have the power to change the world which is sitting to your left and right.”

Reflecting on the impact of his time at Samford, Horton said, “My Samford experience totally prepared me intellectually and spiritually. The people, campus atmosphere, and quality of instruction shaped me into the educator that I am today.” Horton is an award-winning educator and band director at Vestavia Hills High School.

During his tenure, the bands have consistently earned superior ratings and performed at high profile events including the Alabama Music Educators Conference, Music for All National Concert Band Festival, New Year’s Day Parade in London, England, and the St. Patrick’s Day Parade in Dublin, Ireland. A national board-certified teacher, Horton was named to School Band and Orchestra  Magazine’s 2014 list of “50 Directors Who Make a Difference.” Horton served on the teaching staff of the Music for All Tournament of Roses in 2017.

“I am completely blown away by the invitation to be the 2019 Commencement speaker. I do believe that we are compelled to give back to others all of the blessings that have been given to us, so as overwhelming as it is to be chosen, I feel a huge responsibility to give back to a place that has given me so much,” Horton shared.

Horton was also a recipient of Samford’s Audrey Gaston Howard Award that was initiated at Samford’s commemoration of the 50th anniversary of integration. The ceremony included performances from the School of the Arts A Cappella Choir, directed by Philip Copeland and scripture readings by students from both schools. Families from both schools gathered for an annual pre-graduation brunch. School of the Arts graduates and families attended a reception after the ceremony in the art gallery, featuring works by graduating seniors.