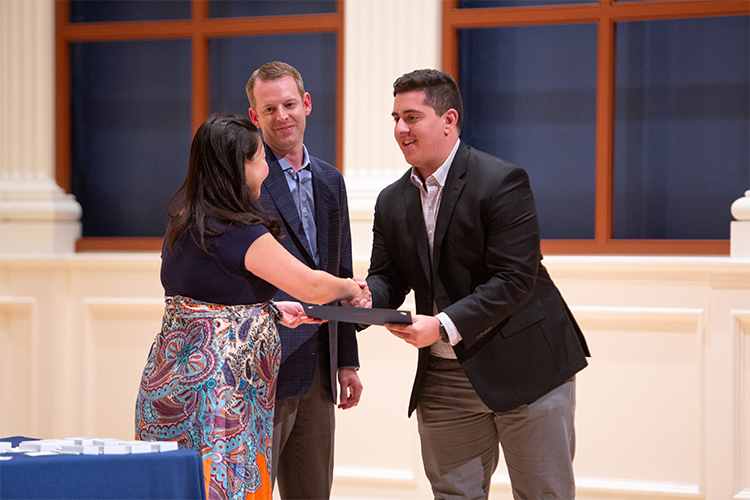 Guest speaker and alumna Lindsay Self encouraged students to remember the qualities and traits that are conducive to becoming an effective educator. “You can remember these [qualities and traits] by keeping the primary focus of your chosen career in mind…TEACH,” said Self. Self provided the candidates with an acronym filled with advice.

T – Tenacious, “You see your students more than anyone so be tenacious in making your impact a positive one even when it would be easier to go with the flow.”

E – Evolution, “If you want your students to learn, grow and adapt, you must be willing to do the same…when you find out there is a better way, evolve.”

A – Anticipation, “Students sense biases even if you don’t recognize them within yourself…So anticipate them to be great and they will rise to meet your expectations.”

C – Compassion, “Challenging behavior is the manifestation of a need. Have compassion and see the need behind the behavior.”

H – Humility, “Be humble enough to listen to what your students are willing to tell you.”

“As your go out into the world and begin this work, t-e-a-c-h, your students depend on it,” said Self.

“Our honorees are already changing the field of education and will have the preparation and power to positively impact hundreds and perhaps thousands of lives of the span of their career,” said Karen Birkenfeld, Department of Teacher Education chair. “We were thrilled to have the opportunity to celebrate their hard work and commitment to the profession that launches all others!”

Michaela Hunter and Anna Fiorucci were the inaugural recipients of the Samford University School of Education International Internships annual scholarship.  The scholarship was created to provide school of education students with the opportunity to experience international internships in developing countries and allow them to work as teacher assistants/interns in schools that serve local (primarily underserved) children. Both Hunter and Fiorucci will travel to Terra Nova Academy in Kampala, Uganda this summer.

Alli Jernigan received the Velma Wright Irons Memorial Scholarship, which is awarded to a student who has exemplified strong goals toward pursuing a career in education.

Abigail Hawkins and Emma Lamstra were awarded the Kathryn Abercrombie Scholarship, which recognizes outstanding students who have achieved a high academic standing and exemplified outstanding character in the field of education.

The Orlean Beeson School of Education Legacy Scholarship is awarded to incoming freshmen students who feel called to work within education and/or in work that enriches the lives of families. Catherine Cowden was selected as the 2019 recipient.

Anna Fiourcci was awarded the Anne Glaze and William C. Stone Scholarship, which was established in memory of Charles R. Glaze and to honor Ila G. Glaze.

Hayley Earle received the Alabama Power School of Education Endowed Scholarship, which was given in honor of Rev. Terry W. DeFoor for his many years of service to the Baptist Ministry and promotion of education for deserving students.

The Raymond Christian Scholarship is awarded to a student preparing for service in public education either as a teacher, counselor or administrator. Hailey Schneider was presented with the award.

Courtney Lauria was awarded the Brookwood Baptist/Nila Graham Campbell scholarship. The scholarship is awarded to a deserving undergraduate student, with preference given to those students pursuing a degree in Early Childhood Education.

Witherspoon also presented the 2019 Golden Apple Award to Starla Castle. The Golden Apple is presented annually to an outstanding alumni educator who has shown excellence in and outside the classroom since graduation.

Castle completed her Bachelor of Science degree in Early Childhood, Special Education, Elementary, Elementary Collaborative (ESEC) at Samford in 2013. She returned to Samford to complete her Master of Science in Education in K-12 Collaborative Special Education in 2017. She is an instructor at Gresham Elementary where she was named the 2018-19 Teacher of the Year and was finalist for Jefferson County Teacher of the Year.

In addition to academic medals and scholarships, several academic awards were presented at the event.

View more photos from the event.