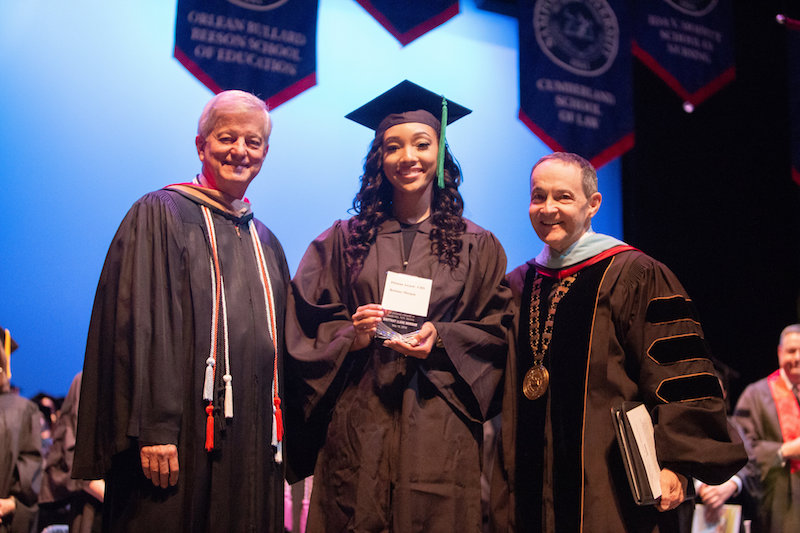 Emily Youree, a University Fellow and English major from Madison, Alabama, received the President’s Cup award. This award is given to the graduating student with the highest undergraduate grade point average (GPA) across all Samford colleges and schools.

Jillian Walters, a pharmacy major from Hattiesburg, Mississippi, received the Velma Irons Award as the graduating student with the second highest undergraduate GPA across all Samford colleges and schools.

Two students – Lucy Kate Green and Brittany Morgan -- received the John C. Pittman Spirit Award, named for an alumnus and longtime trustee and awarded to the graduating student or students who most consistently exhibits exceptional Christian character and community life.

Green, a communication studies major from Gainesville, Georgia, was recognized as a role model of Christian servant leadership.

According to one of her nominators, Green’s four-year journey at Samford was one of constant contemplation and development of strengths she will now take with her to graduate school to study social work.

“She exudes the confidence that only a mature faith can offer,” he said.

Morgan, a sports medicine major from Huntsville, Alabama, was recognized for her strong work ethic and commitment to serving others.

Her nominator noted that with each new leadership role Morgan accepted, a new skill set was revealed and honed.

“Brittany does not draw attention to herself, but she quietly goes about completing any task to the best of her ability. She shows tremendous grit, and I feel confident that Brittany can overcome any obstacle placed before her. She is one of the most professional and poised students I have ever known,” he said.

During the Cumberland School of Law commencement, Isabel Montoya-Minisee received the Daniel Austin Brewer Professionalism Award. This award was endowed by the late Gov. Albert P. Brewer, a former distinguished professor of law and government and professor emeritus at Cumberland, in honor of his father. Each year, the award is granted to a third-year Cumberland student who best exemplifies the high standards of ethics and professionalism expected of members of the legal profession.

While a student at Cumberland, Montoya-Minisee was a member of the Richard “Red” Jones National Moot Court Team, the Hispanic Interest Law Student’s Association and the Trial Advocacy Board. She was an associate justice for the Henry Upson Sims Moot Court Board, a semi-finalist in the Gordon T. Saad Moot Court Competition, and was included on the dean’s list for five semesters. Most impressively, Montoya-Minisee completed her law studies while commuting to and from Huntsville, Alabama where she, her husband and six children live.