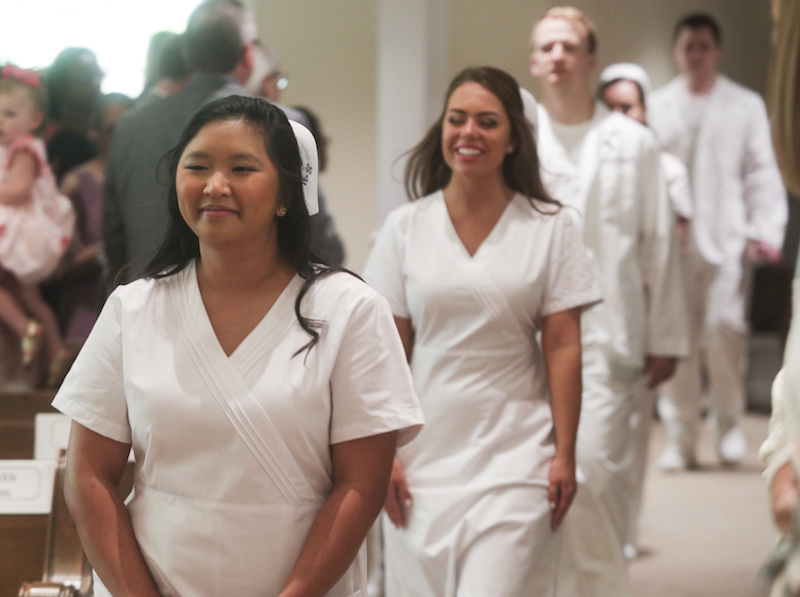 The nursing pin, bestowed on each Ida Moffett School of Nursing Bachelor of Science graduate, is symbolic. While the diploma represents the mastery of the science of nursing, the nursing pin is representative of the student’s mastery of the art of nursing. On Friday, May 10, 89 members of the Ida Moffett School of Nursing class of 2019 received this special distinction.

The pinning tradition is a special rite of passage for nursing students. It was first commissioned by Florence Nightingale, the founder of modern nursing, to set apart those who were prepared, trained and called to serve the sick and injured during the Crimean War. The annual Ida Moffett School of Nursing’s pinning ceremony recognizes the graduate’s entrance into the ministry and service of their fellow man as a nurse.

During the ceremony, the Nightingale award was presented to the two students who express exemplary compassionate care and excellence in clinical nursing practice. The recipients were described as the nurse’s nurse. The recipient for the traditional bachelor of science in nursing program was Wendy McDougal. Sarah Grace Bartley received the award for the second-degree bachelor of science in nursing. Both McDougal and Bartley were selected for this honor by their peers.

Ida Moffett School of Nursing Dean Nena F. Sanders shared a letter written by the school’s namesake Ida Moffett to the 1994 December graduating class. In her letter, Moffett described the pin as a student’s rite of passage into the heart of nursing and the art of successful living.

The Ida Moffett School of Nursing pin was designed by the school’s first graduating class in 1974. By their design, the pin is gold in representation of the golden rule and blue to represent truth and loyalty. The center of the pin is decorated with a stack of books to represent the knowledge the students have gained and will continue to gain throughout their career. The pin also includes the image of a lamp in honor of Florence Nightingale.

“When a patient sees a pin from the Ida Moffett School of Nursing they have every right to expect that they will receive competent, compassionate nursing care,” said Ashley York, assistant professor.

The ceremony concluded with the lighting of the lamp. Florence Nightingale was frequently documented as carrying a lamp as she made her nightly rounds in the hospital wards. The light of her lamp became a beacon of hope to patients. The lamp also symbolizes the search for scientific knowledge and commitment to lifelong learning.

Each graduate was presented with a Bible with an individualized prayer for the graduate. The gift also included a note or verse from each school of nursing faculty and staff member. “As our graduates step into their calling, we felt it was most appropriate that we bestow them the Word of the ultimate healer, Jesus Christ,” said Sanders.

To view additional photos from the ceremony, click here.

The school also recently celebrated the accomplishments of its students at an annual awards ceremony. Read more about this year’s awards.