Students Honored for Leadership and Service at Convocation 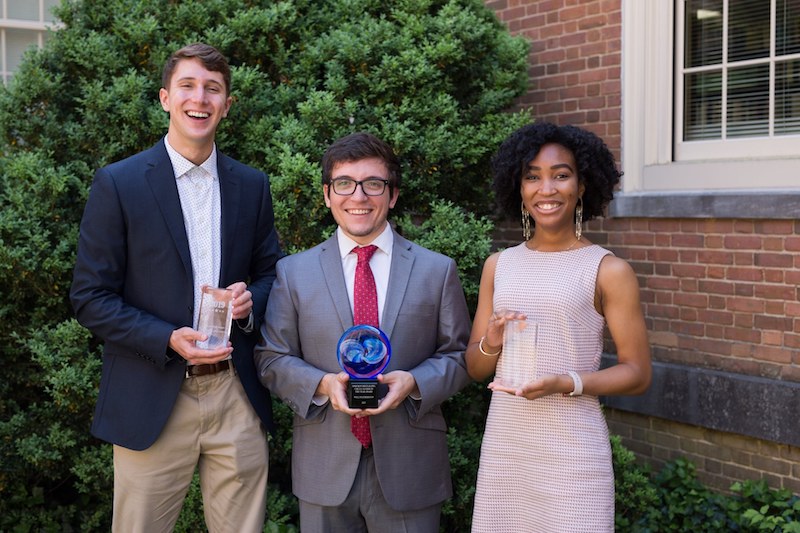 Samford University honored outstanding student leaders at the annual leadership and service convocation April 30.  Four awards are selected through a nomination process by a campus-wide selection committee, and three of the awards are presented by Omicron Delta Kappa national leadership honor society.

Olivia Pride and Ben Lange were winners of the Omicron Delta Kappa Emerging Leader Award. This award is given to one male and one female student who exemplify character, leadership, service and scholarship. Pride is a freshman international relations major from Birmingham, Alabama. Lange is a freshman finance and economics major and University Fellow from Louisville, Kentucky.

Will Featherston received the Omicron Delta Kappa Circle Leader of the Year award for exemplary service to the circle and the Samford community. He is a senior political science major and University Fellow from Huntsville, Alabama.

Danielle Starmer and Heath Padgett were co-winners of the Rufus W. Shelton Community Service Award.  Starmer is a senior nutrition and dietetics major from Brentwood, Tennessee. Padgett is a senior biology major and University Fellow from Birmingham, Alabama.

Gloria Roy received the Service Award as the senior who best exemplifies the highest qualities of social service. Roy is a senior music education major from Kolkata, India. Kimrey noted that "She is described as uniquely gifted, exemplifying honesty, integrity, determination, humility and kindness in extraordinary ways."

Mollie Master received the Gayle Hyle Memorial Award as the woman in the graduating class who best exemplifies Christian character, leadership, school spirit and service. Master is a senior entrepreneurship major and University Fellow from Dallas, Texas.  While Master held leadership roles in multiple student organizations across campus, Kimrey highlighted her consistent approach toward all responsibilities. "Above all, she uses these leadership platforms to serve others and spread the love of Christ to her fellow students, faculty, staff members and community. She takes care to use every action and word to encourage others to pursue the same excellence in Christian service, scholarship and community," he said.

Peyton Welch received the John R. Mott Award. This award is given to a man in the graduating class who best represents high character, scholarship and student public service. Welch is a business major and Brock Scholar from Slidell, Louisiana. Kimrey noted his particular achievements in community involvement. "He started the Young Life Club at Woodlawn High School and served as its team leader, an experience he spoke about as a Q Union student presenter. During his senior year, he developed and designed the peacemakers cadre, which centered around discussions of race and ethnicity as it pertains to the church and Samford University," he said.

Emily London was named winner of the James M. Sizemore Award as the student in the senior class who best demonstrates character, personality, scholarship and unselfish service to Samford.  London is a senior English major and University Fellow from Macon, Georgia. Kimrey noted her characteristics that embody the ideal University Fellow. "She is an academic to be reckoned with, a beautiful writer and a thoughtful reader, but she is also the model community member, someone who is called on often, dependable and enthusiastic about the work she does," he said.

Associate professor of religion, Jeffery Leonard addressed the students with reflections on service and leadership.

See photos from the event