Baseball, Family and the Pharmacy: The Unique Journey of Wyatt Burns 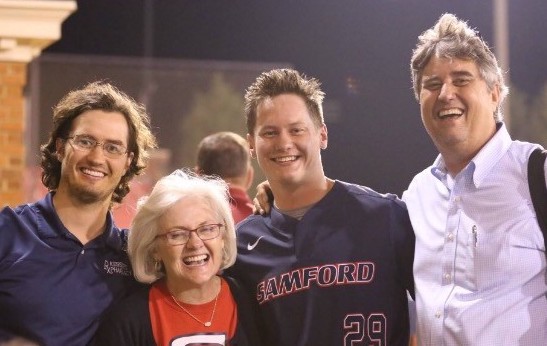 Wyatt Burns with his brother Joe and parents Pam and Mike Burns.

Through the first three years of his high school career, he pitched only four innings. His freshman year at Samford University, he didn’t have a spot on the roster.

And yet, he left the school as the all-time saves leader and helped lead the Bulldogs to a Southern Conference Championship and an NCAA tournament win over Florida State in 2018. His incredible college career led him to an opportunity with the White Sox organization last summer that has continued this season in Winston-Salem, North Carolina.

While his baseball journey has been remarkable, it’s what Burns does in the offseason that truly sets him apart.

He is currently in his fourth year as a student at the McWhorter School of Pharmacy at Samford University. During the offseason, Burns woke up at 6 a.m. each weekday to drive from his home near Birmingham, Alabama, to Bryce Mental Hospital in Tuscaloosa. He took part in rotations each day from 8 a.m. to 4 p.m. before making the long trek back home to eat dinner and work out to prepare his body for baseball season. The combination of being a professional athlete and a pharmacy student certainly isn’t common, but for Burns it maintains a family tradition.

“I’m a third-generation pharmacy student. My grandad went there when it was Howard before it was even Samford University, and my parents actually met in pharmacy school,” said the right-hander.

In addition to his grandfather and parents, both of Burns’s older brothers, Joe and Zach, graduated from pharmacy school at Samford. Though he had been given the opportunity to walk-on to the baseball team at Samford, pharmacy school was a much bigger part of Burns’s college choice.

Along with his desire to become a pharmacist, Samford did provide Burns with an outside chance to continue his baseball career. It makes sense that Burns didn’t receive a lot of interest out of high school; he’d only played two seasons.

“I came back my junior year of high school. I didn’t play my freshman or sophomore year, I played golf,” said Burns.

After being away from the game, Burns decided that becoming a sidearm pitcher would give him the opportunity to pitch at Pinson Valley High School. The inspiration to drop his arm slot came from the success his older brother Joe had with the pitching technique at Samford.

“My older brother played at Samford and they dropped him down to a sidearmer, and I was just kind of missing baseball, so I went back and just started trying it.”

At first, the new throwing motion didn’t bring much success. In his junior season, Burns barely saw the field.

“It was a little difficult because the ball moves a little more when you’re down there. Obviously, it didn’t work out too well.”

After his initial struggles, Burns became more comfortable with his new delivery.

“I dropped down my junior year, threw like four innings, but then I threw around 50 innings my senior year, and now I’m here.”

Following a short high school career, there were not many schools that had the opportunity to see Burns, but Samford head coach Casey Dunn had seen a sidearmer from the Burns family have success before.

Following two years at Jackson State College in Tennessee, Joe Burns had an illustrious two-year career as a walk-on at Samford.

“Well, I always joke around that I had two years to do what he [Wyatt] did in four. I walked on at Samford, ended up taking advantage of some spots and becoming one of the guys at the end of the game.”

In his senior season of 2012, the elder Burns posted a 4–1 record and a 1.64 ERA. In that season, Samford won its first-ever Southern Conference Championship and earned the first NCAA tournament bid in school history.

After the success of his senior season, Joe was drafted by the Texas Rangers in the 28th round of the MLB Draft. He pitched in the short-season Northwest League and with the Low-A Hickory Crawdads before being released after the 2013 season. After Joe’s success, it was logical for Dunn to give Burns an opportunity a few years later.

“Coach Dunn likes the crafty, oddity guys that can come in behind his stock arms that beat everyone with fastballs,” said Joe. “When he saw Wyatt would be a similar arm, he invited him to come in as well.”

Even with the connection to his older brother, making the Bulldogs roster as freshman was no guarantee for Burns. Though he received a walk-on tryout in the fall of his freshman year, Burns did not make the official roster and redshirted. Due to NCAA rules, he was not allowed to practice with the team, but kept working on baseball. Burns’s roommate, Cody Shelton, was in a similar situation.

“Since [Cody and I] couldn’t practice with the team, we would work out together and long toss on the football field.”

It was difficult year to be away from the practice field, but the hard work would pay off.

By their junior year, Burns earned the closer role for the Bulldogs, and Shelton had become the team’s Friday night starter. In their redshirt-senior season of 2018, the pair helped lead Samford to a magical season. The program won its first SoCon Championship since Joe’s senior year of 2012.

In the opening game of the Tallahassee regional, few people would give Samford a chance to take down mighty Florida State. The Seminoles were ranked as the seventh-best team in the country, but thanks in large part to Burns allowing just one earned run over the final 3.2 innings the Bulldogs pulled off the upset by winning, 7–6.

The effort earned Burns his 13th save of the season, and it caught the attention of legendary Florida State head coach Mike Martin, the all-time winningest coach in Division I history,

“I thought their last reliever Wyatt Burns was very impressive,” said Martin at the time. “I can see why his numbers were as they were, cause he’s tough.”

After starting his career without a roster spot, Burns left Samford as the school’s all-time leader in saves with 33. He did all of this while balancing baseball with a strenuous academic schedule in the McWhorter School of Pharmacy. Burns credits his family of pharmacists for helping him make it through.

“Both of my brothers went through pharmacy school, so I had a lot of people I could ask questions if I got stuck on anything,” said Burns.

Burns’s parents, Pam and Mike Burns, have also provided plenty of support. Mike is the owner of Kessler’s Pharmacy in Tarrant, Alabama, and along with being a pharmacist, Pam Burns also works as an attorney. Joe Burns now works as a full-time pharmacist at Kessler’s alongside his dad. After graduating pharmacy school, Zach Burns is currently a medical student at the University of Alabama Birmingham.

It would be easy to think there was pressure on Burns and his brothers to become pharmacists, but that was never the case.

“Really it was old-school parenting—if you’re going to do something, make sure you do it correctly,” said Joe. “It was never ‘Hey, we’re going to raise a bunch of pharmacists.’ We all just ended up being good at math and science.”

While a natural inclination to math and science runs in the family, so too does a tremendous work ethic. Whether it is in the classroom, pharmacy or on the field, the Burns family does not give up lightly. As Burns enters his first full season of professional baseball, in some ways it’s less stressful than his time at Samford.

“Coming from having pharmacy school, having baseball. I mean, pharmacy school took a lot out of me. A lot of stress is lifted off of me,” said the current Dash reliever.

During the offseason, Burns drove over an hour each way to Bryce Mental Hospital in Tuscaloosa to work in rotations as a part of pharmacy school. Despite the long drive and hours at the hospital, Burns still made sure to work out as much as possible to prepare for baseball season. Though he still looks back at pharmacy school lectures on his iPad, Burns’s time in Winston-Salem allows him to focus on the game he loves.

“When I’m out here and I’m in season, it’s good to just focus on baseball. I think it’s awesome.”

This post was originally published by the Winston-Salem Dash Minor League blog, The Dash Board. The team announced May 29 that Burns was promoted to the Birmingham Barons.