Bulldog Days Orientation Program Sets the Tone for Class of 2023 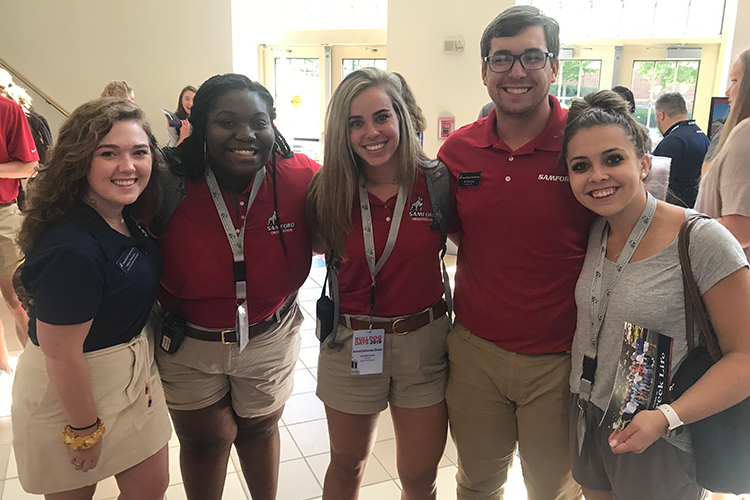 Bo has waited a long time for this moment. Throughout Mary Brittan’s senior year of high school, Bo watched as his sister deliberated over her college decision. Samford gradually made its way to the top of her list.

Though he plays an active role in recruiting new students to Samford as a campus tour guide, Bo decided to take a more hands-off approach with his sister. “I knew at the end of the day she would pick the best place for her,” he said. “I didn’t want her to feel like she had to wear the same hats as I do.”

Mary Brittan, however, attributed her interest in Samford to the way she has seen her older brother flourish on campus. “I have watched him grow into the leader and adult that the Lord truly desires him to be,” she said. “I hope our experiences are pretty similar.”

Bulldog Days confirmed for Mary Brittan that her time in college would reflect growth and community similar to her brother’s.

The two-day event is an introduction for incoming students to campus life at Samford. While on campus, students register for classes, attend information sessions of university offices and services, and socialize with fellow incoming students.

Mary Brittan saw her own support system begin to form among fellow incoming students and upperclassmen at orientation. “My leader did a great job allowing us to feel comfortable around her to ask questions or just talk to her,” she said.

Senior orientation leader Jay Barr sees the individual care upperclassmen leaders give to incoming students like Mary Brittan as an integral part of the orientation program. In her two years serving in this role, she has always aimed to meet students’ needs with discernment and compassion.

“My hope is that each and every one, no matter how different they are from each other or the leaders, leave feeling excited to make this place their home and feeling valued and known,” she said.

The influence of the friendships formed during Bulldog Days extends far beyond the summer. “The most rewarding part of my job is that no relationships that have come with it are temporary,” Jay said. “Having the opportunity to see students come in so fresh and nervous, and then watch them leave their own legacy at Samford is an experience I am nowhere near worthy of, but am so grateful for.”

As Mary Brittan began her own Samford legacy, Bulldog Days has been a catalyst for future success. She considers upperclassmen like her orientation leaders and brother the family she needs to thrive on campus as she pursues a degree in elementary education.

“I feel as though I have a great support group of not only my brother but the orientation leaders as well,” she said. “Proverbs 22:1 says that a good name is better than great riches, and I’m so thankful for the path Bo has already paved for me at Samford.”