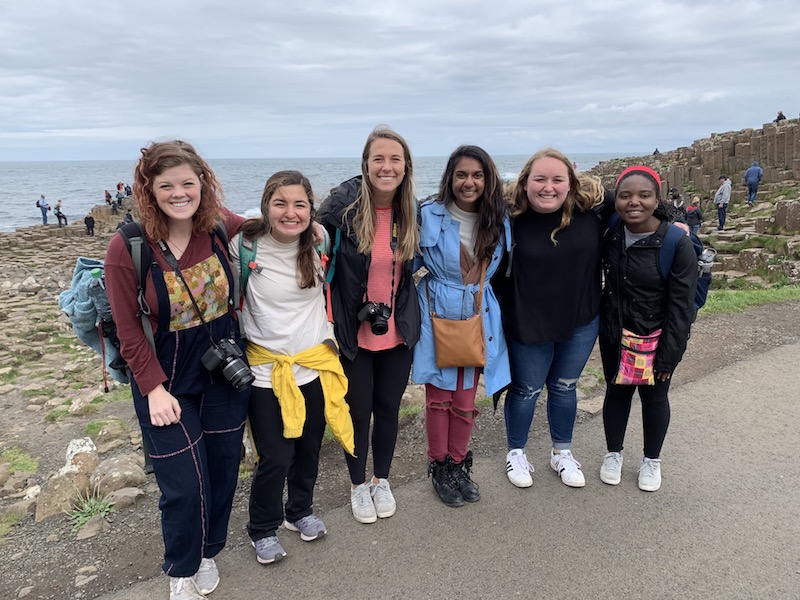 Students of Samford’s Micah Fellows program made global connections through service during a recent trip to Ireland and Northern Ireland.

The 12 students went as part of the program’s curriculum after completing three years in the program and two years of service in the Birmingham area. Before the trip, the students spent a semester learning about the history of their destination.

Micah Fellows is a co-curricular honors program in which students engage in long-term service in the Birmingham community and in discussions about the Christian ideals of justice, mercy and humility.

“By putting in that work beforehand, we emphasize it’s important to do service with context and connection,” said Caroline Janeway, associate director of the University and Micah Fellows programs.  “We have to learn about the city as well. We can’t just go to Belfast and automatically serve and leave and be done.”

Ireland and Northern Ireland were chosen for the trip because of their civil rights history similar to Birmingham’s own. In Northern Ireland, political disagreement over the region’s allegiance to the United Kingdom erupted into religiously charged violence in the 1970s and 80s. In cities like Belfast, structures called “peace walls” were erected to address violence between the groups. Today, this infrastructure divides the city along religious lines, and religious segregation continues to cause major social issues.

“During our time there, the concepts of justice were constantly battling in my mind,” said Micah Fellow Sierra Outerbridge.

During their travels, students heard perspectives from both sides of the conflict. They also worked with a nonprofit seeking to integrate the sectarian youth centers that serve disadvantaged youth across Belfast.

“The students had a lot of conversations about home, about Birmingham and their experiences here, and about how they could be a part of a change, whether here in Birmingham or there in Belfast,” said Janeway. “It was difficult to see something like this and know you’re not going to fix it in one week. But it can change you enough to think about the ways you can affect your own community.”

For the Micah Fellows, the continuing effects of religious sectarianism in Belfast shed new light on the racial conflict of the American civil rights movement. For Outerbridge, the trip served as an important reminder for how a place’s history must help determine her approach to addressing complex social issues wherever she serves.

“The trip underscored the reality that true justice is difficult to attain and in the meantime, conflict can arise that runs deeper into history than one might imagine,” she said. “It helped me understand that social justice is incredibly complex — that whenever you are dealing with individuals with diverse thoughts, beliefs, and expectations, understanding the concept of justice might be harder to discover than one might assume.”

In May 2019, Outerbridge became the first graduate of the Micah Fellows program. She moved back home to Orlando to found Ardiendo Learning, a company that matches students with academic coaches in specific subject areas and tutors students in basic skills like time management and critical thinking.

The Micah Fellows curriculum and the trip to Ireland are integral to the way she thinks about her new venture. “One lesson I know will influence the company and the way I serve is the idea that we must be proximate in order to understand, empathize, and serve people best,” she said.