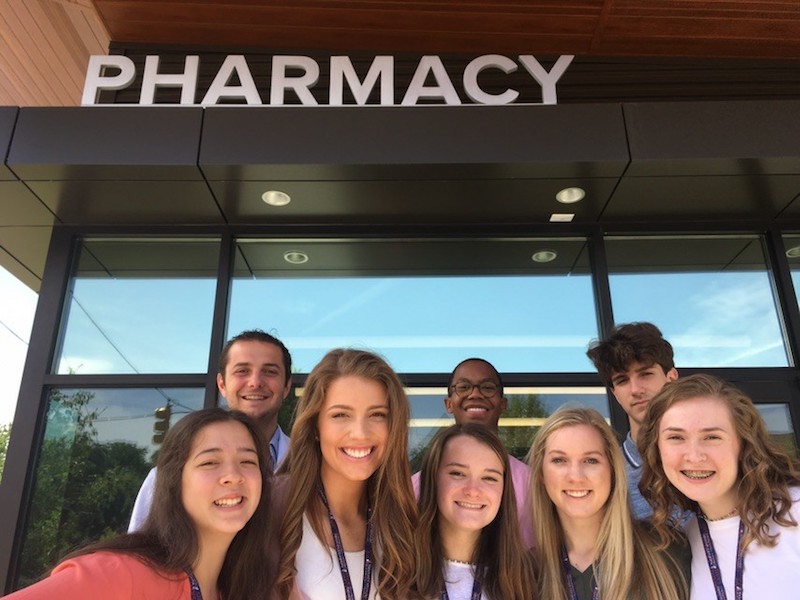 Samford University’s McWhorter School of Pharmacy held its annual Bulldog Pharmacy Camp for high school juniors, seniors and rising college freshmen with the purpose of introducing them to the profession of pharmacy.

Now in its seventh year, the overnight camp includes opportunities for campers to participate in compounding labs, simulation experiences, hands-on demonstrations and tours of local pharmacies and health care facilities.

“We design the camp so participants can see the full scope of the pharmacy profession,” said Jon Parker, director of pharmacy admission. “Our hope is that camp will spark a passion for pharmacy as they consider the career they want to pursue.”

Throughout the week, campers complete labs that introduce them to important elements of pharmacy, like learning to check blood pressure and glucose levels, working in the school’s non-sterile compound lab, and engaging with College of Health Sciences simulation mannikins.

Along with interacting with McWhorter School of Pharmacy faculty and students, campers also have the chance to engage with many of the school’s alumni. Most of the pharmacies they visited throughout the week are owned or operated by McWhorter School of Pharmacy alumni, and they also had the opportunity to interact with alumni at a pharmacist round table and dinner on Monday night.

“The involvement of our alumni made a big impact,” Parker said. “They help connect what we show campers in the lab or classroom with pharmacy in the real world, whether it’s by answering questions about their experience in pharmacy school, explaining why they choose their specific field or discussing challenges they face in their jobs every day.”

Vernonia Ivery, a third-year student, attended Bulldog Pharmacy Camp when she was a high school senior. “As cliché as it sounds, attending pharmacy camp changed my life,” she said. “I was not set on pharmacy as a career, but through the different experiences, I learned that the world of pharmacy has endless possibilities. I knew that a career in pharmacy was what I wanted to pursue, and I knew I wanted Samford to be the place where I obtained the knowledge to impact the lives of others.”

Serving as a counselor was an incredibly fulfilling experience for Ivery. “My heart was so happy as I watched this year’s campers grow in their knowledge and understanding of the profession,” she said. “When I came to camp it was only in its second year of existence. Though it has stuck to its roots of letting campers see and experience different aspects of pharmacy, camp has grown tremendously.”

“I highly recommend McWhorter School of Pharmacy’s Bulldog Pharmacy Camp to anyone considering pharmacy as a career choice. In five years, I’ve gone on to complete Samford’s prepharmacy curriculum, and I’m currently in my third year of pharmacy school. It all would have not come to fruition without the experiences of camp and the everlasting impact of the school’s faculty and staff,” Ivery said.