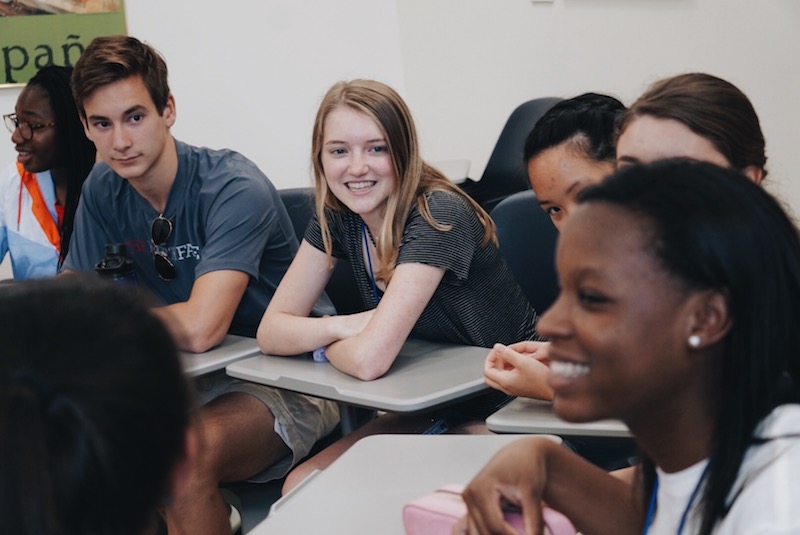 During the two-week program, students chose from morning and afternoon seminars covering a variety of topics within science, humanities, and fine and performing arts. Seminars were taught by experts in their professional or academic field, many of whom are Samford faculty and staff.

Preston Little ’19 offered an Introduction to Photography class that included excursions to locations such as the Birmingham Botanical Gardens for students to practice their skills. Beyond the practical tips he offered, Little sought to impart a broader life lesson to his students. He hoped that all students would come to value their unique perspectives.

“I’m noticing a spark of authenticity in these students as they realize that AGS encourages their extreme academic interests,” he said.

Luke Reed, a senior at Fayetteville High School, said the photography seminar taught him to approach the art with consideration of the diverse perspectives of its subjects.

“Everyone has their own story. Capturing that through photography is different for everyone. Learning different styles for each person you photograph is important,” Reed said.

In addition to Little’s class, students could explore interests in everything from video production, global citizenship, Greek tragedy, and film studies. A conscious effort is made to avoid presenting courses commonly available in standard high school curricula to encourage creative and educational pursuits at a level and pace not always possible during the regular school year.

This year’s class included representatives from 24 counties and 58 high schools. Ninety-one percent of the participants were ranked in the top 10 percent of their class, with eight ranked first, four ranked second, and nine ranked third. Their average GPA was 4.31, and their average ACT score was 29.5.

To qualify for the prestigious program, students were nominated by their high schools based on their academic excellence and extracurricular involvement. The seniors are leaders at school and in their communities and had to be recommended by their school’s faculty to participate

As they attended seminars, ate in the dining hall, and spent free time on campus, students got a glimpse of college life. Evangel Christian School senior Lindsay Culpepper said AGS made leaving high school in a year seem less intimidating.

“AGS has made me feel a lot more independent,” she said. “Our experiences have taken a lot of teamwork and collaboration as well as independence, so I’ve been learning to find a good balance between those two as I think about college.”

AGS students also attended panels on scholarships and college life, participated in a talent show and an Olympics recreational competition, and went off campus for a community service project in Woodlawn and a Birmingham Barons game.

Dr. George Keller, associate professor of biology at Samford, has served as the program’s director for 19 years. As he welcomed students when they arrived on campus, he shared his aspirations for their AGS experience.

“I tell them that my goal is to give them an experience that they could not get anywhere else in Alabama,” he said.

One of Keller’s objectives was to encourage students to use their talents to invest in the state of Alabama’s future.

“I hope students make friends with other high-achieving students from around the state, that they get a small taste of college life, that they feel honored for their accomplishments, and that they have the desire to either stay in or come back to Alabama to be future leaders.”