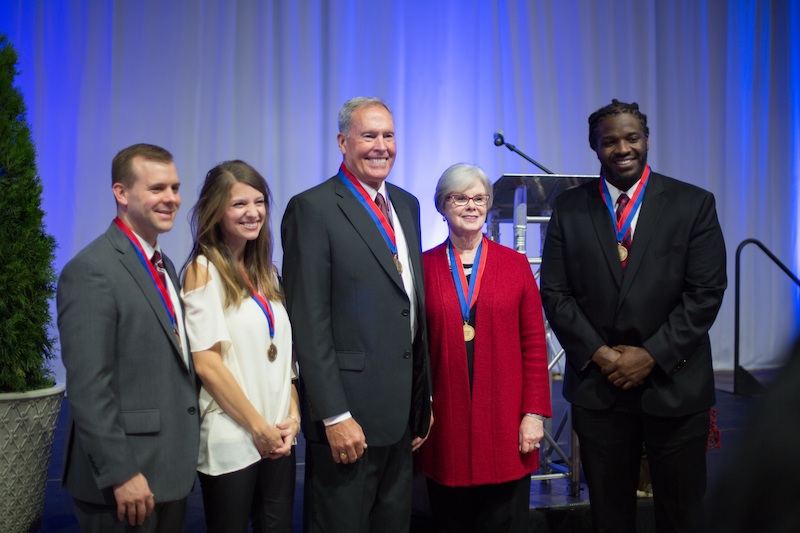 Samford University will honor four outstanding alumni with the university’s 2019 alumni awards. The recipients will be honored during Homecoming festivities Nov. 8-9.

John Floyd, a three-time Samford graduate, has been named Alumnus of the Year, the highest honor the university bestows on graduates. He received a Bachelor of Arts in 1985, a Juris Doctorate in 1988 and a Master of Science in Environmental Management in 1999. Floyd has been with the Vulcan Materials Company since 1988 and currently serves the company as a senior attorney with a nationwide legal practice.

Floyd served on the Samford University Board of Trustees and held roles on the executive committee and as secretary. He also served on the Board of Overseers as chairperson, as well as on the Cumberland School of Law Advisory Committee.

A committed member at Saint Mark the Evangelist Catholic Church, he has chaired the pastoral council and taught a coed Sunday School class for high school students for 11 years. He sings in the choir, serves as a cantor, and leads an in-home faith sharing group on a weekly basis.

Nominees for Alumnus of the year should be distinguished in their professional careers, community and church involvement, and in their ongoing service to and financial support of Samford.

The 2019 Outstanding Young Alumnus is Randall Woodfin, who is the mayor of the city of Birmingham, and received a Juris Doctorate from Cumberland School of Law in 2007. Previously, he served as president of the Birmingham City School Board 2013-2015 and assistant city attorney. As mayor, he has developed the Office of Social Justice and Racial Equity dedicated to human rights issues in the city, ensured the availability of winter shelter and warming stations for the city’s homeless population and worked toward the cessation of gun violence in the Birmingham area. He is also active in community service as a board member for the Alabama Campaign to Prevent Teen Pregnancy, the Birmingham Botanical Gardens, and the Hispanic Interest Coalition of Alabama.

Woodfin frequently speaks at events on Samford’s campus, including the Samford Black Alumni Association annual luncheon and a conversation with award-winning journalist Jeff Johnson during Black History Month celebrations. In 2018, Woodfin was an inaugural recipient of the Audrey Gaston Howard Award. He currently serves on the Samford University Board of Overseers.

She is also the founder and chief education officer of Learning Little People, a company that provides professional learning opportunities for educators in low-income schools and programs to prevent summer learning loss, tutoring and ACT prep services.

During her time at Samford, Littleton-Williams worked with President Thomas E. Corts to establish what would become the Rev. John T. Porter Minority Scholarship. Under her leadership as president of the Samford Black Alumni Association, the scholarship surpassed $100,000 in contributions. In 2018, she was an inaugural recipient of the Audrey Gaston Howard Award, and Orlean Bullard Beeson School of Education established Jewel Littleton-Williams Annual and Endowed Scholarship for Minority Students in her honor. She currently serves on the Samford University Board of Overseers.

Previously, Toering worked at the International Justice Mission in Washington, D.C, as a donor relations intern and a development coordinator. While at Samford, she fostered a passion for international justice through involvement with Amnesty International and Kiva International.

The Humanitarian of the Year award is made to Samford University graduates of true distinction, wide respect and acknowledged leadership. Nominees are recognized for having given selflessly and working tirelessly to better the lives of others and society at large by staying true to the Samford University Mission.

The honorees will be recognized at the Homecoming candlelight dinner and alumni awards program, The Beesons, on Friday, Nov. 8.