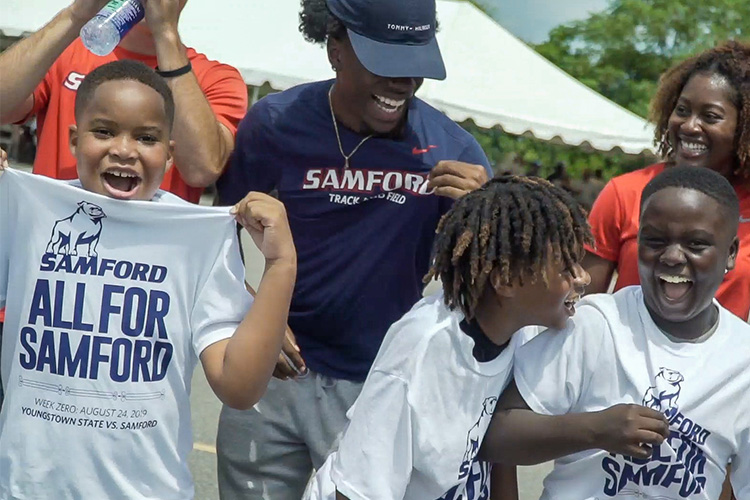 The Samford football team kicked off the season in the nationally televised Guardian Credit Union FCS Kickoff against Youngstown State. Samford students, alumni and friends gathered to support the Bulldogs and enjoy fan experiences at the Cramton Bowl in Montgomery.

The Office of Alumni Programs and Annual Giving and the Bulldog Club hosted a barbecue tailgate with nearly 200 Samford fans from five different states. In addition to the lunch, Samford’s outdoor FanFest event was packed with hundreds of children from the YMCA of Greater Montgomery and Next Level Football Camp, 160 student-athletes and athletic staff from other Samford teams enjoying a live band and inflatables.

“Whether an alumnus, a Bulldog Club member, parent of a student, or friend of the university, we all have a united passion for cheering for Samford athletes. We are thankful to the City of Montgomery staff for being a great host for Samford University,” Kasey Bodine, assistant director for development and Samford Bulldog Club said.

This year marks the 150th anniversary of college football.

The Office of Alumni Programs and Annual Giving and Samford Athletics will host additional tailgating events at this season’s games against Mercer and Auburn. Details and registration can be found at www.samfordsports.com/dogsontheroad.