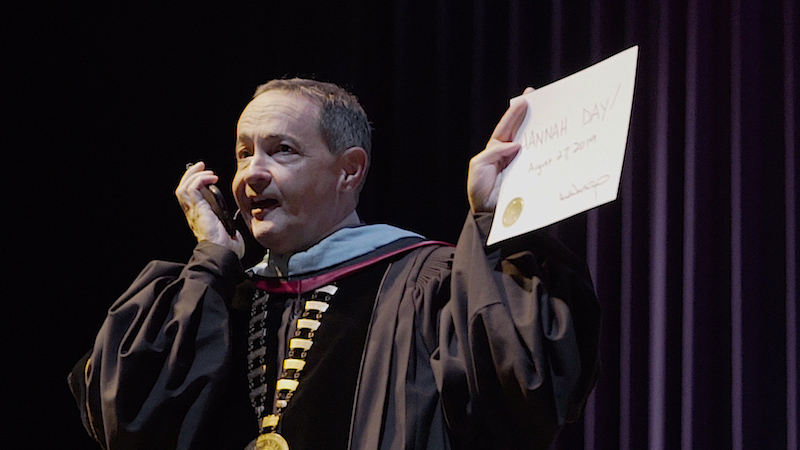 In his opening convocation address Aug. 27, Samford University President Andrew Westmoreland spoke to students, faculty and staff about two personal experiences that found him on the opposite ends of the spectrum of humility and arrogance and the learnings he took away from those memorable moments.

“I think that a key to ethical leadership is having the appropriate humility and having the appropriate confidence and finding the equilibrium between those two … This year I want us to work as a campus community on this. I want us to study it, learn from it, and become better practitioners of finding the equilibrium between humility and confidence,” he said.

This practice in equilibrium is embodied in a special student Westmoreland also honored during his speech. Junior Hannah Precise was watching the convocation remotely from Children’s Hospital in Birmingham where she is currently receiving treatment for recurrent leukemia.

“You think about Hannah’s case — on the one hand, Hannah is relying on Team Hannah at Children’s Hospital, an army of friends and people who are coming alongside her. She knows she’s got to have help from others to win this battle. That’s pure humility,” he said. “On the other side, you’ve got this dogged determination from someone who has already walked this walk once who knows she will be victorious and that’s the kind of confidence that is needed. Those characteristics come together in one human life.”

Precise was also honored with Westmoreland declaring Aug. 27, 2019 as “Hannah Day” on campus.

At the beginning of the program, university minister Bobby Gatlin prayed over the audience and student leaders, who were also honored by Vice President for Student Affairs Phil Kimrey. Additionally, J. Michael Hardin, provost and vice president for academic affairs at Samford University, presented three university awards to faculty and staff.