National Publications Rank Samford University Among the Best Universities in the U.S. 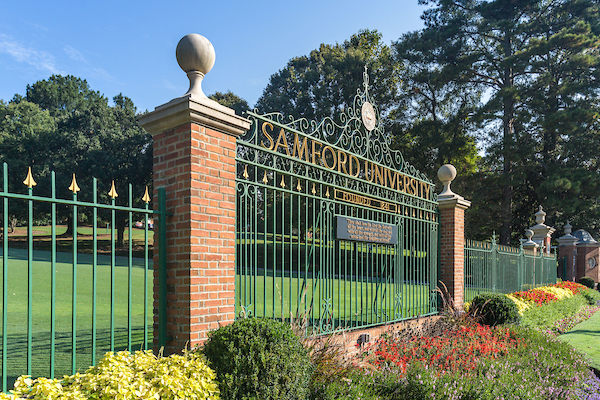 The Wall Street Journal ranked Samford third nationally in student engagement, up nine places since last year’s ranking. The student engagement ranking considers how well institutions challenge and inspire their students both inside and outside the classroom, as well as the breadth of courses available.  According to The Wall Street Journal, student engagement is central to exceptional teaching quality and entails education of the entire student – body, mind and soul. Samford also advanced 33 places to earn 170th overall among 801 institutions in the national ranking, and first among all schools in Alabama, a position held every year since the rankings’ inception in 2016.

U.S. News & World Report ranked Samford 40th nationally for best undergraduate teaching among all national universities in the United States. Samford is the only Alabama university included in that list. The rankings for undergraduate teaching focus on universities that place an emphasis on teaching undergraduate students in a high-quality manner.  Samford also ranked first in Alabama and 100th in the nation in the publication’s listing of best value schools. According to U.S. News & World Report, value is determined through a thorough assessment of academic quality and the net cost of attendance for a student receiving the average level of need-based financial aid. U.S. News & World Report’s Best Colleges list ranks Samford 147th overall among 399 “National Universities,” which include the country’s top private and public institutions that offer a full range of undergraduate majors as well as master's and doctoral degrees.

In an evaluation of nearly 1,200 four-year institutions, Kiplinger’s Personal Finance ranked Samford 34th among all private universities and 115th nationally among all public, private and liberal arts colleges and universities in the country. Kiplinger’s also ranked Samford first in Alabama, ahead of all other private and public institutions in the state.

In the 2019 higher education ranking published by Forbes, Samford moved up 32 spots to 169th among all private and public colleges and universities in the country.

Cumulatively, these rankings affirm Samford’s growing national reputation as one of the leading Christian universities in the United States today. Considering there are approximately 4,300 degree-granting postsecondary institutions recognized by the Department of Education, these rankings all place Samford within the top four percent of colleges and universities in the country.

“We are pleased that Samford continues to be recognized for the quality and value of our academic programs,” said Samford President Andrew Westmoreland.  “While national rankings are just one measure of our progress, they provide a source of pride for Samford students, employees and alumni who celebrate the growing national reputation of their university.”