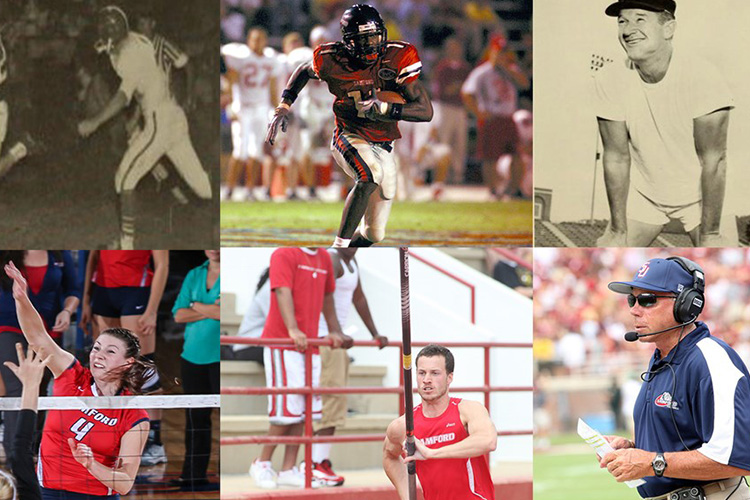 Samford Athletics recently announced the members of the 2020 class of the school's Athletics Hall of Fame.

The 2020 Hall of Fame class will be the fourth class to be inducted since it opened in 2017. Included in the 2020 class are football standouts Efrem Hill and Bobby Jackson, multi-sport star and former coach Virgil Ledbetter, volleyball standout Michaela Reesor, track and field standout Michael Seaman and former head football coach Pat Sullivan.

The 2020 class will be recognized at this year's Homecoming football game Nov. 9 at Seibert Stadium. The class will be officially inducted on April 18 in the Pete Hanna Center.

Samford Director of Athletics Martin Newton said he is proud to see how much the Hall of Fame has grown in just a few short years.

"It's hard to believe we are inducting our fourth class into the Samford Athletics Hall of Fame," Newton said. "It seems like yesterday we held our first ceremony in the Regions Room in Cooney Hall. Fast-forward to last year when we had to move the event to the court in the Pete Hanna Center because we outgrew the space. The support and popularity of the induction ceremony has become one of the best events on campus and this year's event will not disappoint."

Newton added that the 2020 class is full of deserving individuals and it is a group that Samford is proud to add to its hall of fame.

"Like our previous classes, this year's class has some high profile names and deserving individuals that have represented this great institution and our athletics department in a first-class manner and consistent with our Christian mission," Newton said. "I look forward to another great evening and can't wait to introduce the class of 2020 during Homecoming festivities on Nov. 9. Congratulations to all our new inductees."

The Samford Athletics Hall of Fame was officially opened in spring 2017 with the inaugural class of Walter Barnes, Lauren Blankenship, Bobby Bowden, Wally Burnham, Cortland Finnegan and Charlie Owens. The Hall of Fame is located on the third floor of the Pete Hanna Center.

About this year's inductees:

EFREM HILL
Efrem Hill was one of the top receivers to ever play football at Samford. He had a breakout season as a junior in 2003, tallying 92 receptions for 1,387 yards. Following the 2003 season, he was named the Ohio Valley Conference Offensive Player of the Year and Male Athlete of the Year. He was also named a consensus All-American and was a finalist for the Walter Payton Award. During his senior season, Hill again led the team with 71 catches for 984 and was named first-team All-OVC. He left school as the program's all-time leader in receiving yards and still ranks in the top five in the category. After his senior season, he signed as an undrafted free agent with the Carolina Panthers. He spent time on the practice squads for the Panthers, Tampa Bay Buccaneers and Cleveland Browns. He later played in the CFL for the Edmonton Eskimos and Saskatchewan Roughriders. He also spent time with the Georgia Fire in the Professional Indoor Football League.

BOBBY JACKSON
Bobby Jackson played football at Samford from 1959 to 1962, playing under legendary head coach Bobby Bowden. He was a starter on both offense and defense for the Bulldogs. He was also on the punt and kickoff return teams. During his Samford career, Jackson rushed for 2,084 yards and 27 touchdowns, and he averaged 7.3 yards per carry, the highest average in school history. He led the team in rushing in both 1960 and 1961, and in 1960, he averaged a career-high 9.6 yards per carry. Jackson earned Little All-America accolades following the 1962 season. Jackson went into coaching after his playing career was over. He coached at Shades Valley High School in 1963 and 1964. He then went into college coaching, spending time on staff at Florida State, Kansas State, Louisville and Tennessee. Jackson later coached in the NFL with the Atlanta Falcons, San Diego Chargers, Phoenix Cardinals, Washington Redskins, St. Louis Rams and Miami Dolphins.

VIRGIL LEDBETTER
Virgil Ledbetter served Samford as both a student-athlete and coach. He played multiple sports at Samford (then Howard College) from 1939-42. During his coaching career, Ledbetter coached football, basketball and baseball at Samford. In football, he was an assistant coach in 1956 and again from 1959-62, and he was the program's head coach from 1957-58. Ledbetter was the school's head basketball coach from 1955-59, and again from 1963-65, and he was the school's head baseball coach from 1956-65. In 1964, Ledbetter authored a book, Coaching Baseball, which is still found in many libraries. He also served as a professional scout for the Brooklyn Dodgers. As a tribute to Ledbetter, Samford established the Virgil Ledbetter Fund in 1988 to assist the baseball program in various ways. As a further tribute, Ledbetter was inducted into the Samford Baseball Hall of Fame in 2006.

MICHAELA REESOR
Michaela Reesor played volleyball at Samford from 2011-14 and is one of the most decorated players in program history. She left school with career records for kills (1,639) and attempts (4,107). She posted three of the top single-season kill totals with 497 in 2013, 445 in 2014 and 439 in 2012. She played on two teams that won the Southern Conference Tournament and earned NCAA Tournament bids, and another that won a Southern Conference North Division title. She was named first-team All-SoCon in 2012 and 2013, and she was named SoCon Player of the Year in 2013. Reesor was named SoCon Female Athlete of the Year for the 2014-15 academic year, and she was an NCAA Woman of the Year Top 30 nominee in 2015. Reesor also played on the Canadian Women's National Volleyball Team.

MICHAEL SEAMAN
Michael Seaman was an outstanding pole-vaulter for the Samford University track and field team from 2009-12. His stellar career included being an impressive five-time All-American. He was also a four-time Southern Conference champion and left Samford as the school record holder in the indoor and outdoor pole vault, and the Southern Conference record holder in the indoor.  He qualified for five NCAA Championships, two indoor and three outdoor. In the 2011 outdoor season, Seaman earned second-team All-America status with a 16th-place finish at the NCAAs and improved on that in the 2012 indoor season, where he placed sixth to earn first-team honors, his best career finish. He won three-straight indoor SoCon championships in 2010, 2011 and 2012, setting the SoCon record in 2012 with a height of 5.45m. He also won the outdoor SoCon title as a junior in 2011.

PAT SULLIVAN
Pat Sullivan is one of the most recognizable names in college football. The 1971 Heisman Trophy winner as a quarterback at Auburn served as Samford's head football coach from 2007 to 2014. He led the program to its first Southern Conference championship in 2013, and he retired as the school's all-time winningest coach. He earned SoCon Coach of the Year honors in 2012. As a player, in addition to winning the Heisman Trophy, Sullivan was named an All-American and the SEC Player of the Year in 1970 and 1971. He helped lead Auburn to three post-season bowl appearances and was named the MVP of the 1970 Gator Bowl and the 1971 Sugar Bowl. As a coach, he was the quarterbacks' coach and co-offensive coordinator for three-straight SEC championship teams at Auburn. He then became the head coach at TCU from 1992-97, earning Southwest Conference Coach of the Year honors in 1994. He served on the UAB coaching staff from 1999-05, helping lead the program to its first-ever bowl appearance.