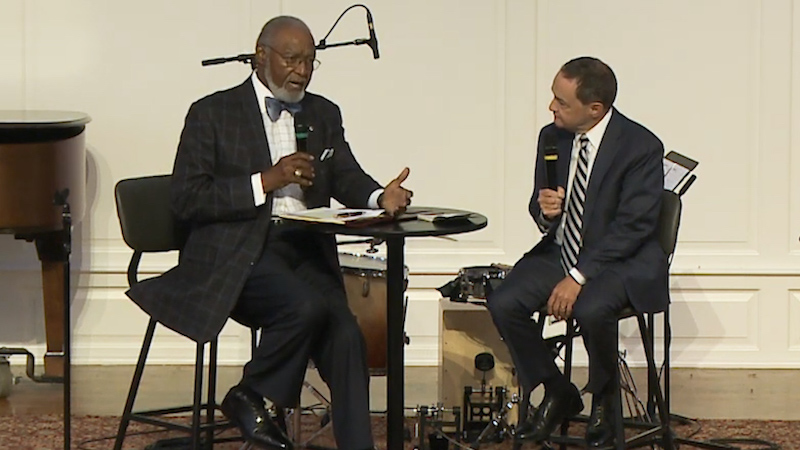 As the first black employee to hold a corporate vice president position at Alabama Power, Robert Holmes knows it was his relationships and faith that helped him to persevere through early racism in the workplace.

Holmes, vice chair of Samford’s Board of Trustees, shared the journey of his 40-year career in an interview with University President Andrew Westmoreland in front of students, faculty and staff at Reid Chapel. Holmes is the first guest of the new leadership interview series, “For the Good,” sponsored through the Frances Marlin Mann Center for Ethics and Leadership.

During the conversation, Holmes discussed the challenges of growing his career as a minority in the 60s. It was the mentorship he received early in his career by the late George Howard that deeply influences his professional confidence and commitment to mentoring others today.

“George taught me to be more aspirational,” he said. “The turning point was the self-confidence he helped me to get. He showed me that he cared about me. Now I try to engage people and show a leader who cares more about them than myself… We need leaders of faith. We need leaders who are driven not by self-centeredness, but who are doing what they believe their calling is and see their purpose.”

The new lecture series pursues a challenge that Westmoreland set for students, faculty and staff when he opened the school year in seeking an equilibrium between confidence and humility in leadership practice.

At opening convocation in August, Westmoreland said, “I think that a key to ethical leadership is having both the appropriate humility and the appropriate confidence and finding the equilibrium between those two … This year I want us to work as a campus community on this. I want us to study it, learn from it, and become better practitioners of finding the right balance between humility and confidence.”

“For the Good” convocation conversations will interview leaders who not only excel professionally, but who have worked, and continue to build a Kingdom here on earth of which God would be proud.