Hynds and Kanute Named to SoCon's All-Faculty and Staff Team 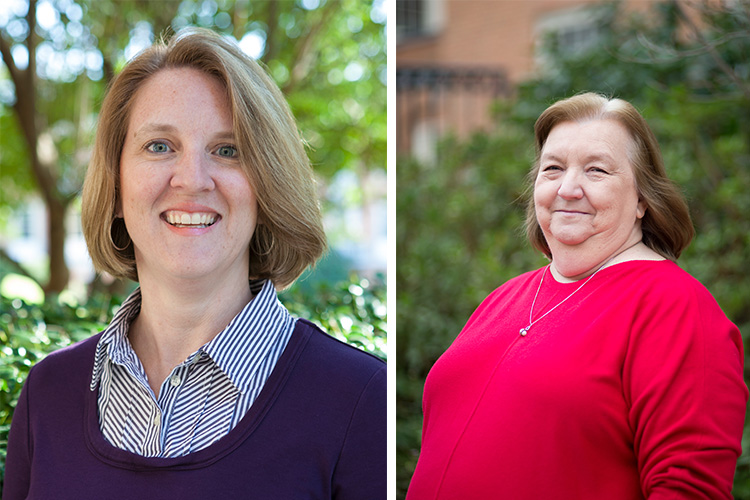 Samford's elected representatives on the team are Emily Hynds, associate dean and associate professor in Howard College of Arts and Sciences, and Theresa Kanute, the One Stop financial services advisor for Samford University athletes.

The team is part of the SoCon Academic exchange, a collaborative effort by the conference's chief academic officers to promote cooperation among the membership to benefit all students—not just athletes. While the selections were left up to each institution’s discretion, the recipients all shared the common characteristics of demonstrated service to the institution and contributions to campus life and the local community. Faculty members selected have demonstrated strong contributions to teaching, research and/or service, while staff members are being recognized for bringing out the best in others and creating conditions for success.

In recognition of this honor, Hynds and Kanute will each be presented a plaque at the Samford men's basketball game versus Mercer University on Jan. 18.

Emily Hynds
Emily Hynds began teaching mathematics at Samford University in August 2000. Her areas of interest lie in Combinatorics and specifically Graph Theory. Hynds is enthusiastic about the growing interest in undergraduate research and has worked on several projects with students over the years. She currently serves as associate dean of the Howard College of Arts and Sciences following her service as chair of the department of mathematics and computer science. Before assuming her current role, Hynds also served as the faculty athletics representative for Samford University. She is an avid college sports fan and can often be found at Samford Bulldog sporting events.

Theresa Kanute
Theresa Kanute is the One Stop financial services advisor for Samford University students, including all student athletes. Kanute started at Samford in 2000 in the Bursar’s Office and transferred to the Office of Financial Aid in 2002. She attended Samford’s evening college and graduated in 2014. She and her husband of 42 years, Steve, have four children and five grandchildren, and one of the couple’s favorite pastimes is watching them play sports. Kanute says the most enjoyable part of her job is working with Samford students and their families.