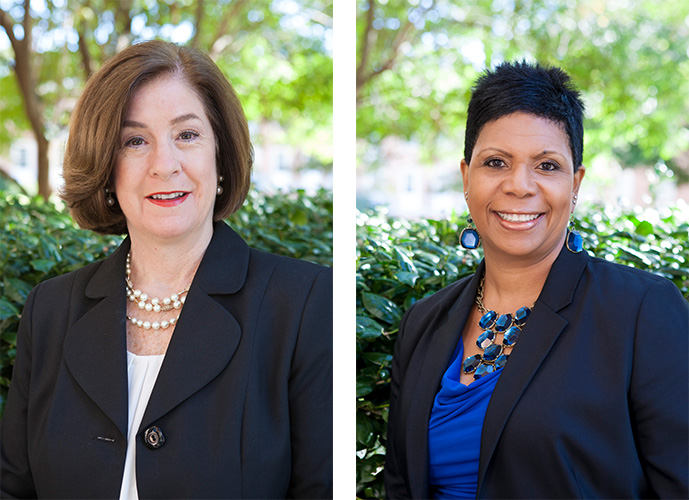 Samford University presented two of its top awards to faculty during opening convocation for the spring term Jan. 21. Carol Ratcliffe, professor and chair of the Department of Healthcare Administration, received the George Macon Memorial Award. Jane Martin, professor and senior associate dean of Ida Moffett School of Nursing, was presented the Jennings B. Marshall Award.

Ratcliffe, at Samford since 2013, is board certified in healthcare management and is a fellow of the American College of Healthcare Executives. After working in various nursing leadership roles, including vice president of patient care services and chief nursing officer for 16 years, Ratcliffe served as a member of Ida Moffett School of Nursing’s Advisory Board, was a frequent guest lecturer for undergraduate nursing students during their leadership course and was highlighted and profiled as a nursing executive by the school before she began adjunct teaching in the Doctor of Nursing Practice (D.N.P.) program in 2010. She is a graduate of the nursing school’s first D.N.P. cohort in 2009.

The George Macon Memorial Award goes annually to a faculty member who through outstanding performance as a teacher, counselor and friend demonstrates the ability to inspire students to greatness. The award honors 1884 graduate George Macon who later joined the faculty to teach chemistry, natural history, applied mathematics and engineering.

Martin, at Samford since 1996, was the first graduate faculty member to be hired at Ida Moffett School of Nursing. As a new hire, she quickly developed a legacy of excellence. She began her tenure by launching the school’s first nurse practitioner program. She developed curriculum, secured clinical sites and taught the inaugural class of just four students. Today, the program has developed into a full department that offers a combined 12 pathways, concentrations and certificate options and has contributed to the careers of nearly 900 nurses. Martin has continued to play an instrumental role in the growth and development of the school. She has assisted with the appointment of faculty, aided in the formation of numerous programs, overseen multi-million-dollar grants and further developed curriculum and experiential learning opportunities for the school.

The Jennings B. Marshall Award goes to a faculty member who has made significant and sustained service contributions at Samford. The contributions of this faculty member are evidenced by substantial time commitments and significant accomplishments related to service activities, along with providing exemplary leadership. The award honors the longtime business professor for whom it is named.