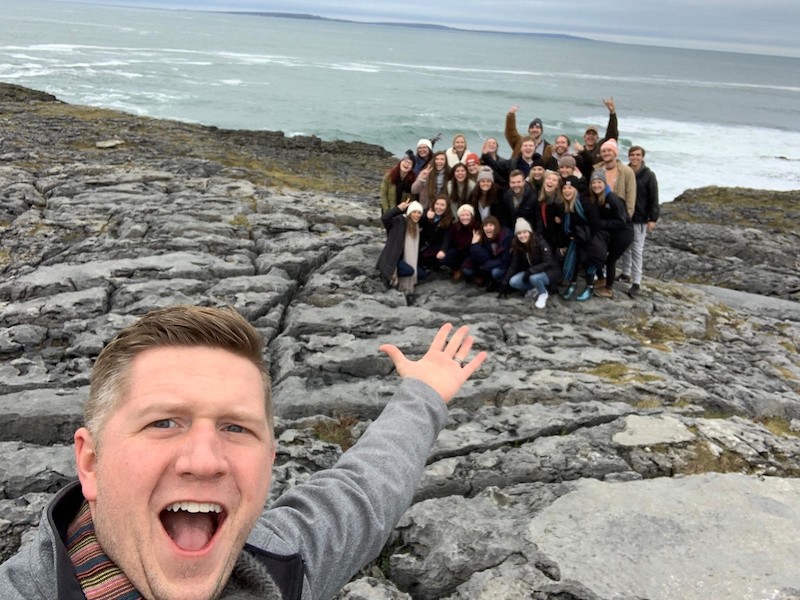 Samford University students studied in such far-ranging locations as Europe, the Middle East, Australia and the Caribbean island of Saba during Jan term 2020.

Among the Samford Abroad destinations was Sydney, Australia, where students studied the arts and explored their engagement with society. Though the students were studying safely in areas that were not impacted by fires, they had the unique experience of being in Australia while bushfires were devastating other areas of the country.

“Although we were never in danger, we experienced the haze and smoke from the fires and spoke to several people whose lives were affected by them,” said Samford art professor Joe Cory, who led the Arts in Society: Sydney course.

“This experience brought the climate change issue to the forefront of the many things we experienced and discussed. It also demonstrated to our students how a country can rally to support each other and have meaningful conversations about present day issues.”

Cory noted that the Sydney program used the arts to explore Australia’s long history through the present day.

“This included learning about Australia’s Aboriginal history and culture, the country’s colonial past and role during both world wars, and Sydney’s development into a global city that is heavily influenced by both Asia and America,” said Cory.

Highlights included seeing two performances at the iconic Sydney Opera House, hiking in the Blue Mountains and along the Pacific Ocean, participating in an Aboriginal walking tour, visiting multiple art galleries to view both historic and contemporary work from the region, worshiping together in different worship traditions and learning about Sydney’s various architectural styles. Professor Mark Castle and associate professor Brad Diamond co-led the Sydney course.

Arts in Society courses also took students to London and Dublin, Ireland. In London, the students learned from the ample theatrical and artistic resources of the city with visits to museums, backstage tours and theatre attendance in a course led by associate professor David Glenn and assistant professor Lauren Evans. In Dublin, the class studied the value of artworks and aesthetics in human societies with particular attention to Irish culture in a class taught by assistant professors Ryan Misner and Mark Lackey.

Students got to know Greece as the Crucible of Civilization in a course directed by classics professor Randy Todd. The course focused on the history and culture of Greece and the Greco-Roman world through its geography, physical remains and museum artifacts. Course co-leaders were associate professors Andy Montgomery and Doug Clapp.

Religion associate professor Jeff Leonard taught Israel: Exploring the Biblical World. “Lying at the most important crossroads of the ancient world, the land of Israel has played a role in human history that far exceeds its modest borders,” said Leonard. “In this course, students examine the geography and history of Israel and the religions and cultures this land has produced.” The course includes onsite study of Jerusalem and other locations.

The Samford Abroad courses enrolled 186 students while total Jan term enrollment was 765. Included in this number were 338 students in online classes.