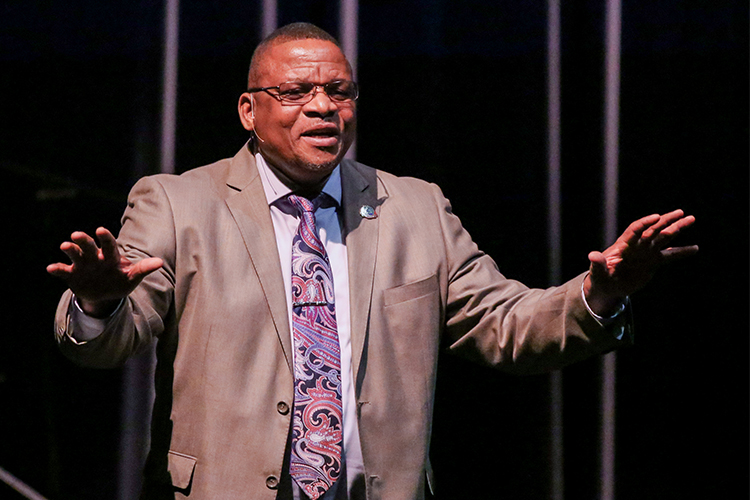 Msiza, a native of South Africa, is in his final year of a five-year term as president of BWA and came to campus to share his experiences growing up in the era of apartheid in South Africa. Msiza met with students, faculty, staff and local ministers in his two days on campus, sharing testimony of being Christian and black in South Africa in a time of open discrimination.

In an address to students during convocation, Msiza detailed his struggles with resentment and anger in the face of racism and segregation. He likened those past emotions to those he witnesses in present day.

He highlighted that with great tension comes an even greater need for understanding and pointed to Corinthians 2: 18-21 as inspiration.

“It is on every continent you find that among God’s people —all of us, of all kinds of ethnic groups— there is that friction. An unknown tension is tearing us apart. This was not God’s intention when God created the world. God wanted us to live in peace. To live together as sisters and brothers regardless of where we come from, regardless of our ethnic groups, regardless of our language. God’s intention is for us to live in that peace so that together we can manifest God’s image.”

He challenged the audience to be ambassadors of Christ in the face of hatred and remember the power of God’s reconciliation.

“When we are reconciled with God, then we are able to reconcile with one another,” he said. “I’ve lived in a society full of tension and full of hatred. And my prayer is that your generation should not live in that divide of society.”

Msiza is the first African to hold the position of president of the BWA since 1970. He previously served as a BWA vice president. He also pastors Peniel-Salem Baptist Church in Pretoria.