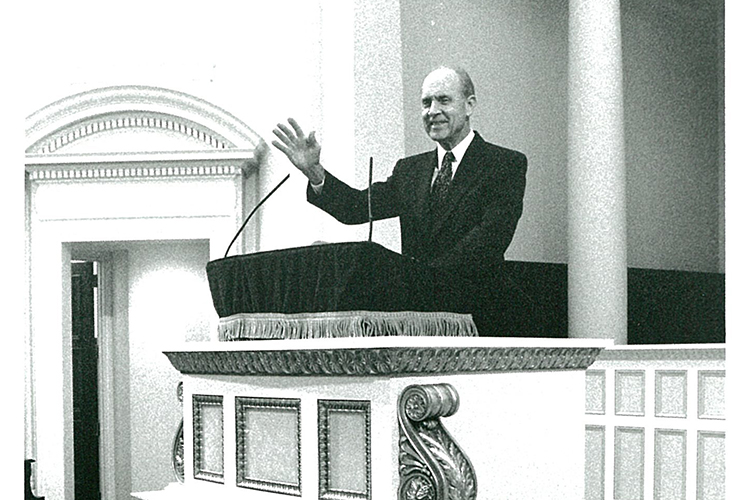 Sigurd F. Bryan was a 1946 graduate of Samford University who returned to teach in the school’s Department of Religion and Philosophy for 46 years, from 1956 until 2002. He also served as chairman of the department for six years, beginning in 1980.

Bryan, who died March 8 at the age of 96, was also an ordained minister who served as an interim pastor, supply preacher and Bible conference teacher over the years. In addition, he did curriculum writing for the Baptist Sunday School Board.

“Sigurd Bryan was among those legendary faculty members who created an environment for teaching and learning at Samford that became a tradition of excellence,” said Samford President Andrew Westmoreland. “He was a mentor and friend to thousands of our students and his presence among us will be missed.”

Samford Board of Trustees Chair Bill Stevens said, “I had the pleasure to know Dr. Bryan as a student and later as a Trustee. He used his gifts in many ways to touch lives for Christ.”

Bryan earned his bachelor of divinity and Th. D. degrees from Southern Baptist Theological Seminary in Louisville, Kentucky. During his seminary days he served as pastor of Walnut Grove Baptist Church in Lodiburg, Kentucky, for more than six years. The town was about 50 miles from the Louisville seminary, and Bryan commuted by train and bus.

While serving on the Samford faculty, Bryan also had sabbatical leaves to study at Harvard Divinity School in 1965; at Cambridge Divinity School in England during 1973; and at Regent’s Park College, Oxford University, England, in 1980. He toured the Holy Land on several occasions.

“I have never seen myself as a great Biblical scholar, but rather as a sincere student of the Scriptures,” Bryan told interviewer Dennis Sansom in 2018.

During his undergraduate years at Samford, Bryan served as assistant pastor at First Baptist Church of Jasper, Alabama, for three years. The church pastor, Gilbert Guffin, injured his back, and Bryan was called on to serve as preacher. Later, the Jasper church ordained him once he began preaching in Kentucky.

Born on a farm in Barbour County, Alabama, Bryan grew up in Dothan, Alabama, and graduated from high school there. He was baptized at Headland Avenue Baptist Church as a 16-year old and felt the call to Christian service.

Bryan is survived by his wife of 55 years, the former Sara Emma Pate, and their daughter, Sara Catherine.