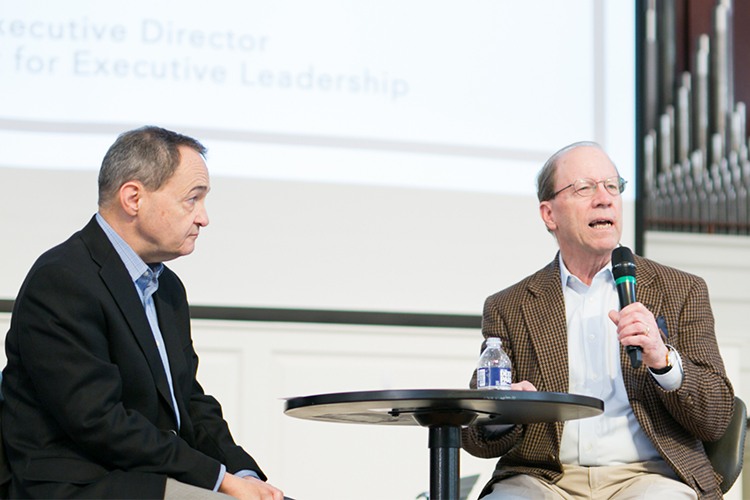 As the founder of the non-profit, faith-based Center for Executive Leadership in Birmingham, Richard Simmons has committed his life to providing spiritual and leadership guidance to people across the country.

While it’s a role he was called to later in life after 25 years in the insurance industry, it’s clear Simmons had been serving others in this capacity for years prior.

Simmons shared his professional and spiritual journey with students as the second guest to be interviewed by University President Andrew Westmoreland in the leadership interview series, “For the Good,” sponsored through the Frances Marlin Mann Center for Ethics and Leadership.

“God’s gift He gave me was the gift of teaching,” he said.

That gift and the desire for more time with his family led him to combine his love of ministry with his professional expertise to launch The Center for Executive Leadership. The center offers multiple bible studies for groups and individuals. During the interview, he shared some of the guiding principles he explores in ministry.

He went on to describe the traits of successful leaders including humility, fearlessness, wisdom and the ability to make hard decisions.

“The most important leadership quality is humility in my opinion, without a doubt,” he said. “Humility involves modesty and not having a desire for glory for yourself. Real leaders are also proactive and can make hard decisions. It’s so easy to make a decision that is popular to make everyone you lead like you, but great leaders don’t make choices based on what’s popular. They make decisions based on what is right.”

Simmons most recently authored Reflections on the Existence of God, a series of short essays seeking to answer life’s most enduring question: Does God exist?

The “For the Good” series is sponsored through the Mann Center for Ethics and Leadership, bringing guests to the campus to provide practical guidance on ethical decision making.