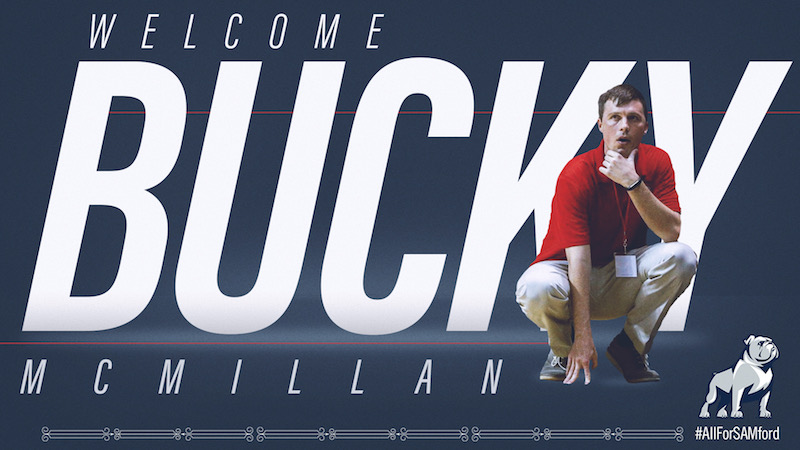 “When we set out to hire a new coach for our men’s basketball program, we had three main criteria,” Newton said. “We wanted someone with head coaching experience and a proven track record of winning championships, someone who could excite and engage the Birmingham and Samford communities and someone who understands and embraces the mission of our great university. Bucky McMillan quickly became the obvious choice. Bucky has a proven track record of winning championships, a tireless work ethic, a unique basketball mind and the energy and enthusiasm to bring championship basketball to Lakeshore Drive.”

In 2020, the Mountain Brook program was ranked 13th in the list of top 25 public high school basketball programs in the United States over the last decade. In 2018, the National High School Coaches Association named McMillan its National Coach of the Year after his team finished the season with a 34-3 record and ranked No. 17 in the USA Today national rankings. His 2019 team finished the year ranked No. 5 nationally by USA Today. McMillan’s teams were ranked No. 1 in the AHSAA state rankings during each season from 2013 to 2020.

“I am thankful and grateful for this opportunity,” McMillan said. “I want to especially give thanks to the leadership at Samford for their confidence in me to lead this program. When I came to Mountain Brook I had never been a high school head coach and the administration there took a chance on me, and this is a similar situation. I am ecstatic to be going to work for one of the top Christian universities in the country, whose values I believe in. I am excited to get to Samford and build relationships with the faculty and staff, and most importantly with the student-athletes.”

During his 12-year run in charge of the Spartans’ program, McMillan won 333 games, averaging nearly 28 wins per season. After posting an 18-12 record in his first season as head coach, McMillan’s teams won at least 23 games in each of the next 11 seasons.

McMillan played his college basketball at Birmingham-Southern College from 2002 to 2006, where he was named to the Big South Conference Academic Honor Roll all four seasons, and to the league’s All-Academic team as a senior. He also earned the distinction of being named to the National Association of Basketball Coaches Honor’s Court. McMillan earned his bachelor’s degree in education services from Birmingham-Southern in 2007.

“I encourage everyone to get their season tickets now and enjoy the Bucky Ball era of Samford basketball,” Newton said.