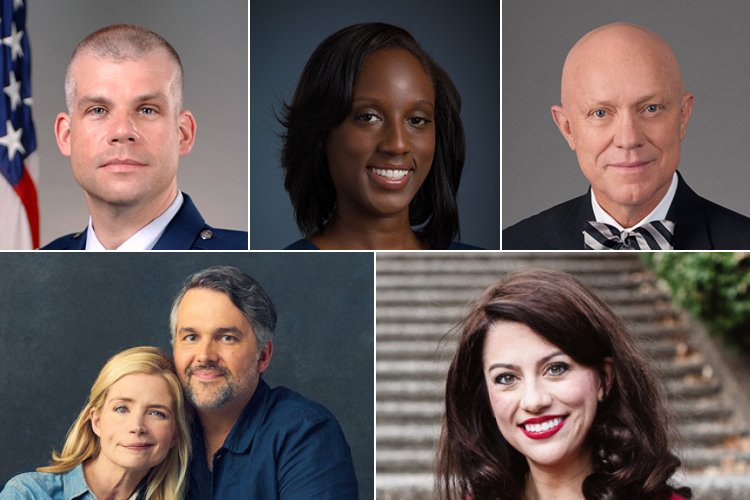 Samford University has named the six outstanding alumni to be honored as the 2020 alumni awards recipients. The honorees will be celebrated during Homecoming festivities November 13-14.

Lt. Col. Brandon Bailey ’05 and Michael Escoe ’84 have been named Alumni of the Year, the highest honor the university bestows on graduates.

Bailey has served this country with honor and distinction as a nurse in the United States Air Force. He has held numerous roles throughout his career including Director of Reserve Medical Plans and Programs and Director of Search and Rescue. He is a Purple Heart Medal recipient. Bailey has continued to serve his country through his involvement with the Disabled American Veterans Association and Disabled American Veterans Choctaw County, Alabama Chapter. He has served on numerous committees for the Ida Moffett School of Nursing, including the centennial committee and as the veteran advisor for grant applications and awards for programs enabling military veterans to pursue nursing degrees. Bailey is currently a contributing member of the Ida Moffett School of Nursing Advisory Board.

Escoe is the area director of Christian Leadership Concepts, a small group spiritual leadership program for men. He is a committed humanitarian focused on faith-based ministry, including previously serving as the executive director of U.S. operations for Because of Kennedy, a nonprofit organization caring for orphans and vulnerable families in Ethiopia. Escoe has also earned multiple recognitions for marketing, communications, events and branding with 30+ years of experience at senior level positions with three technology industry giants – AT&T, BellSouth and France Telecom. He currently serves on the board of advisors for Brock School of Business and leadership team of the Samford Alumni Association Atlanta Chapter.

Lindsey Harris ‘06 and Mary Kathryn Steel ’07 have each earned Outstanding Alumna of the Year. This award was established in 2009 to recognize recent graduates for professional achievement and involvement with Samford.

Harris has distinguished herself in the nursing profession and the local community. In addition to her continued support of Samford University and the Ida Moffett School of Nursing, she is also an active member of the Birmingham Black Nurses Association mentorship program and the incoming president of the Alabama State Nurses Association. She will be the first African American president of the 100-year-old organization, where she has previously served as state secretary and as a member of the Commission on Professional Issues.

Steel is an award-winning public affairs professional for AbbVie, a FORTUNE 100 global biopharmaceutical company in North Chicago, IL. She is a committed supporter of Samford. She remains actively involved in helping students, faculty, and staff to advance the mission of Samford University in essential ways. In addition to serving as a member of the Forever Samford  campaign cabinet and chairing efforts to raise money in support of the recent Daniel House renovation, Steel previously served on the Howard College of Arts and Sciences advisory board.

Humanitarian of the Year

Katherine and Jay Wolf ’04, are being recognized with the Humanitarian of the Year Award. The Humanitarian of the Year award is given to Samford University graduates of true distinction, wide respect and acknowledged leadership. Nominees are recognized for having given selflessly and working tirelessly to better the lives of others and society at large by staying true to the Samford University Mission.

As the founders of Hope Heals Ministry, the Wolfs have committed their lives to advocating for disabled people. Their mission to offer families and individuals with disabilities steadfast hope comes from their own life experience. At 26, Katherine’s life nearly ended with a catastrophic stroke. Miraculously, she survived and continues her recovery. Since starting their ministry, the Wolfs have shared their journey through two books, speaking events and Camp Hope Heals, a camp offering fun and fellowship for families affected by disabilities.

The honorees will be recognized at homecoming celebrations in November.