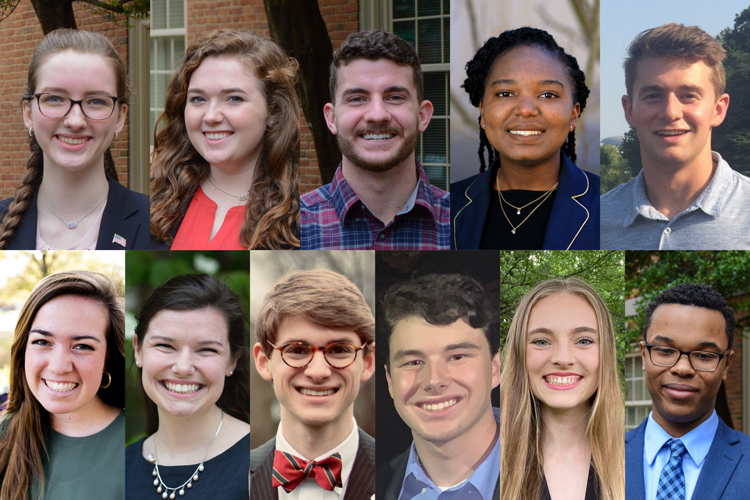 Samford honored 11 students as the 2020 recipients of the leadership and service awards. Four awards are selected through a nomination process by a campuswide selection committee, and three of the awards are presented by Omicron Delta Kappa national leadership honor society.

Caroline Bass and Garret Grove received the Omicron Delta Kappa Emerging Leader Award. This award is given to one male and one female student who exemplifies character, leadership, service and scholarship. Bass is a history and geography major from Vestavia Hills, Alabama. She was honored for her excellence in the classroom, service on the Student Government Association Senate and the Senate academic affairs committee in addition to chairing the Alabama Bicentennial Committee.

Grove is a journalism and mass communications major from Brandon, Mississippi. He was honored for his commitment to academic excellence, while serving his peers in the Student Government Association as a member of the freshman forum, the freshman class president and a member of the Senate finance committee.

Heath Padgett received the Omicron Delta Kappa Circle Leader of the Year award for exemplary service to the circle and the Samford community. He is a senior biology major and University Fellow from Birmingham, Alabama.  Padgett has served in numerous leadership roles including president of Samford’s Student Government Association, Student Senate, Pre-Dental Society and other organizations, while volunteering in both church and community settings. His academic honors include memberships in Omicron Delta Kappa, Phi Kappa Phi, Beta Beta Beta, Alpha Epsilon Delta and Alpha Lambda Delta.

Haven Voorhees and Cole Shiflett received Luke 2:52 awards, given annually to undergraduate students who excel in all areas of student life: civic, social, spiritual and physical. Voorhees is a junior economics major from Greensboro, North Carolina. She was recognized for her service as a Rho Gamma, connections leader, freshmen retreat leader and the student recruitment team. She is a Jefferson County Memorial Project Fellow and serves as an intern with Impact America.

Shiflett is a sophomore journalism and mass communication major from Denton, Texas. He has served as a connections leader,  a volunteer at the YMCA Kids Club and worked with the International Justice Mission. He is also a Global Missions Scholar and the founder and director of Anchored Passion ministry.

Hope Dawson and Cameron Hunt received the Rufus W. Shelton Community Service Award.  Dawson is a junior journalism and mass communication major from Birmingham, Alabama. Dawson was recognized for her service in a multitude of capacities, including, but not limited to, Greek life, the Student Recruitment Team, Samford Ambassadors and various roles within the Student Government Association.

Hunt is a junior biology major from Tupelo, Mississippi. Hunt was recognized for his service in the Student Government Association, Greek life and the Student Recruitment Team. He is a Howard Scholar and ambassador.

Joyeuse Senga received the Service Award as the senior who best exemplifies the highest qualities of social service. Senga is a senior health sciences and public health major from Kigali, Rwanda. Senga was recognized for her faithful service to her peers at Samford, the Birmingham community and her home community of Rwanda.

Julianne Jorgensen received the Gayle Hyle Memorial Award as the woman in the graduating class who best exemplifies Christian character, leadership, school spirit and service. Jorgensen is a senior English and classics major and University Fellow from Memphis, Tennesee. She was recognized for her many leadership roles, including president of the Howard College of Arts & Sciences ambassadors and significant contributions to the Communications Resource Center.

Heath Padgett received the John R. Mott Award. This award is given to a man in the graduating class who best represents high character, scholarship and student public service.

Joyner Bousquet received the James M. Sizemore Award as the student in the senior class who best demonstrates character, personality, scholarship and unselfish service to Samford. Bousquet is a senior healthcare administration major from Suwanee, Georgia. He was recognized for his numerous contributions, including participating in the Global Missions Scholars Program, serving as a connections leader and as a spiritual leader within Samford Athletics as a bible study and cadre leader.