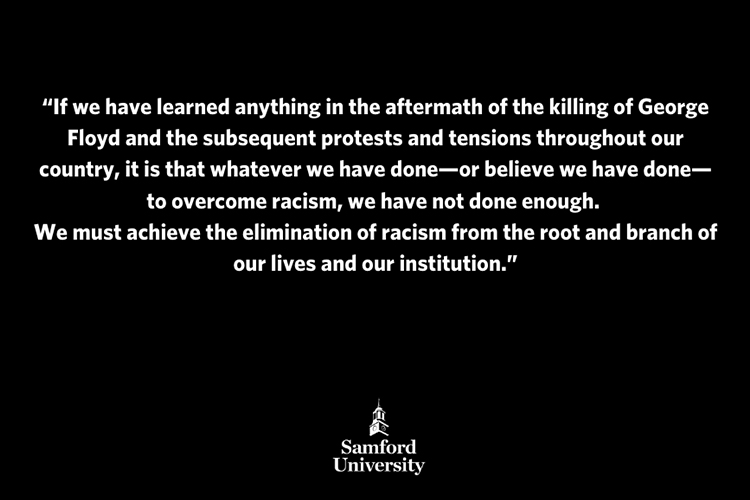 In an email to the campus community on June 8, Samford University President Andrew Westmoreland was clear. “We will do more. We must do more,” he wrote as he outlined a number of initiatives intended to immediately contribute to greater racial diversity on campus. Initiatives include required diversity training for all employees, additional resources for the Office of Diversity and Intercultural Initiatives and events to facilitate intentional dialogue around race and justice.

Central to this is the appointment of a task force to advance racial diversity on campus and to work toward reconciliation. Assistant Provost for Diversity and Intercultural Initiatives Denise Gregory first announced the creation of the task force along with an update on recent campus diversity initiatives in her message to the campus community on June 4.

“The formation of this group is an important next step to ensuring continued progress and to implementing actions that will build a more diverse community,” said Gregory.

Robert Holmes, vice chair of Samford’s Board of Trustees, will serve alongside Gregory as co-chair. Holmes, who retired in 2010, became the first black employee to hold a corporate vice president position at Alabama Power when he was appointed vice president for human resources in 1990. The task force will be comprised of faculty, staff, students, parents, alumni, trustees and community partners who are committed to affecting change on Samford’s campus.

Westmoreland noted that the task force will focus on actionable recommendations. “Universities rely on standing committees and specially-appointed task forces to examine issues, forge consensus and develop recommendations,” he said. “I look forward to working with the members of the group to plan and implement their best ideas for racial progress. Dr. Gregory, Mr. Holmes and those who will work with them have my complete support.”

According to Gregory, the group’s recommendations will:

“Our areas of focus will include campus training and education, hiring processes and compensation, curriculum development and delivery, promotion and tenure, vendor contracts, and the recruitment and retention of diverse students, faculty and staff,” said Gregory. “We will also be exploring ways to better support the mental, physical, emotional and spiritual wellbeing of our students and employees of color,” she added.

As the task force is being organized, Westmoreland has committed to additional initiatives that will commence immediately.

Garry Atkins, a 25-year veteran of the Samford staff, will move into a new role with specific responsibilities related to working with colleagues across campus to build and maintain an environment that is recognized as one of the best places for people of color to work in the Birmingham metro area.

Despite the fiscal challenges in the wake of COVID-19, Samford will also increase the number of employees in the Office of Diversity and Intercultural Initiatives in order to enhance the effectiveness of the important work performed by the office.

Beginning in fall 2020, all employees will participate in newly-designed education and training regarding bias, equality and diversity. “While elements of the training will likely include videos and online materials, I want face-to-face interaction to permeate our efforts,” said Westmoreland. “I have long believed that barriers are best overcome and understanding achieved when people have honest conversations in small groups.”

In addition, the university will host two prominent African American leaders for special convocations this fall. City of Birmingham Mayor Randall Woodfin will be Westmoreland’s guest for a “For the Good” convocation on September 10. The “For the Good” series, sponsored through the Mann Center for Ethics and Leadership, enables campus interaction with leaders who are making a positive difference in the community and beyond. On November 5, Cecelia Walker, Executive Director of Chaplaincy and Clinical Pastoral Education for Brookwood Baptist Health, will also speak as a part of this series. Both Woodfin and Walker are members of Samford’s Board of Overseers and Samford graduates.

“If we have learned anything in the aftermath of the killing of George Floyd and the subsequent protests and tensions throughout our country, it is that whatever we have done—or believe we have done—to overcome racism, we have not done enough,” said Westmoreland. “We must achieve the elimination of racism from the root and branch of our lives and our institution.”

In the days following the death of George Floyd, Westmoreland, Gregory and other faculty and student leaders have spoken out against systemic racism and in solidarity with the Black community in efforts to achieve genuine equity and equality. Westmoreland first wrote to campus on June 1 and a series of statements from other campus leaders have followed. Central to this is an ongoing commitment to progress and transparency.

“It remains important to me and to so many others at Samford to do whatever we can, day by day and course by course, to help each of us understand and practice the ways in which we can build a better future not just for ourselves, but for everyone,” said Westmoreland. “We cannot grow weary in pursuing those goals. I appreciate the dedicated partnership of so many friends, near and far, as we walk toward progress.”