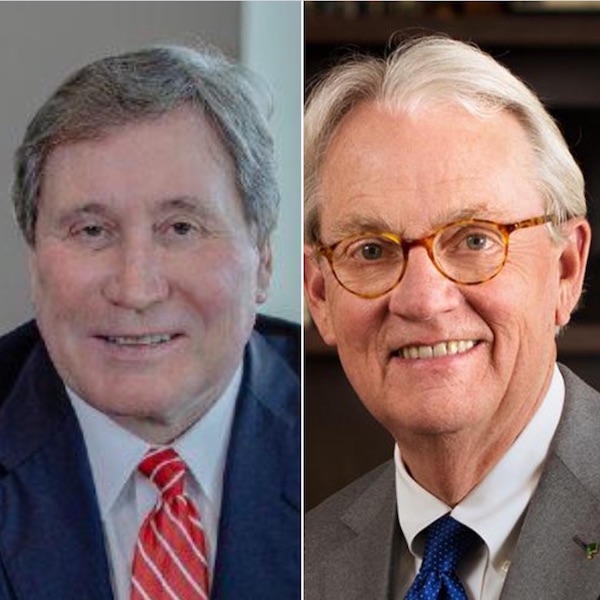 Joe Ritch , J.D. ’75 and Stan Starnes J.D. ’72, graduates of Samford’s Cumberland School of Law, are among the seven business leaders to be honored in the 2020 class of the Alabama Business Hall of Fame.

Housed in Bidgood Hall on The University of Alabama campus in Tuscaloosa, Alabama, the Alabama Business Hall of Fame is home to leaders and key figures who have helped shape the business landscape in the state of Alabama. Nominations for induction into the Hall of Fame are submitted to the selection committee by the 24-member nominating committee. The nominating committee is representative of every geographic area and major category of business in Alabama. The board of directors serves as the selection committee. In the interest of the health and safety of inductees and guests, the induction ceremony has been rescheduled to fall 2021.

Ritch, an attorney with Sirote & Permutt PC, is a dedicated civic leader who has been influential in shaping the Huntsville community with his service in numerous organizations. His leadership as chairman of the Tennesee Valley Base Realignment and Closure Committee brought thousands of military and government contractor jobs to Redstone Arsenal and steered a $175 million state-funded investment to the area for K-12 facilities. He also served as the first chairman of the board of directors from Alabama on the Tennessee Valley Authority and chairman of its nuclear oversight committee. Additionally, he served on the board of directors of multiple defense and technology companies, including CAS Inc. and Axometrics.

Starnes is executive chairman of ProAssurance Corp., a top casualty insurance carrier in the country. As CEO from 2007 until 2019, Starnes transformed the company’s business model on a national scale. As a result, the company returned more than $2.1 billion to shareholders while growing its equity by 37%. Along with his father, he founded the law firm now known as Starnes Davis Florie. At the time he was selected, Starnes was the youngest lawyer in Alabama ever elected to the American College of Trial Lawyers.  In 2011, Starnes established the Starnes Chair in Law in honor of his father, Stancil R. Starnes, and in recognition of both of their legal careers. Today, the endowed professorship is held by professor Brannon P. Denning. Starnes also served as the inaugural lecturer of the Lawyer in Residence program at Cumberland School of Law in 2014.
Samford is a leading Christian university offering undergraduate programs grounded in the liberal arts with an array of nationally recognized graduate and professional schools. Founded in 1841, Samford is the 87th-oldest institution of higher learning in the United States. The Wall Street Journal ranks Samford 1st nationally for student engagement and U.S. News & World Report ranks Samford 66th in the nation for best undergraduate teaching and 104th nationally for best value. Samford enrolls 5,683 students from 47 states and 19 countries in its 10 academic schools: arts, arts and sciences, business, divinity, education, health professions, law, nursing, pharmacy and public health. Samford fields 17 athletic teams that compete in the tradition-rich Southern Conference, and ranks 6th nationally for its Graduation Success Rate among all NCAA Division I schools.
Director of Communication
Holly Gainer
Hgainer1@samford.edu
912-344-8443