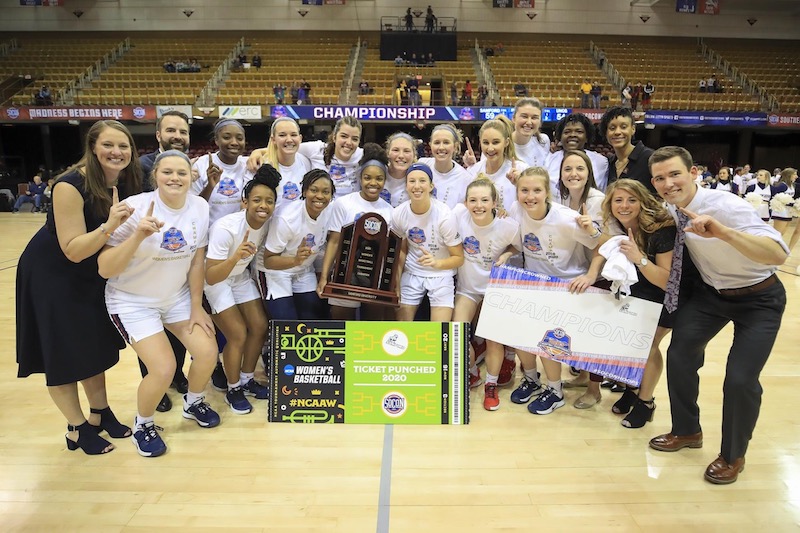 Despite the spring sports being interrupted by the COVID-19 pandemic, Samford Athletics turned in its most successful year during the 2019-20 seasons.

The first championship of the year came when soccer earned a 1-0 win over Chattanooga on the final day of the regular season to earn a share of the regular-season title. The championship was the sixth-straight for the program, the longest streak in league history.

The soccer team then competed in the SoCon Tournament, opening the event with a 5-1 win over The Citadel. In the semifinals, the Bulldogs defeated Mercer, 3-0, avenging the lone SoCon loss of the season. The Bulldogs then took down Furman, 1-0, in the championship game to win the tournament and earn the league’s automatic bid to the NCAA Tournament. Goalkeeper Morgan McAslan was named the tournament’s Most Outstanding Player after posting a pair of shutouts on the way to the tournament win.

The Samford volleyball program posted its best SoCon record since joining the league, finishing with a 15-1 league mark. The Bulldogs secured the regular-season title with a 3-1 win at ETSU on the final day of the regular season.

In the SoCon Tournament, Samford cruised to a 3-0 win over The Citadel in the first round. In the semifinals, Samford fell behind, 2-1 to Furman, but rallied for wins in the fourth and fifth set to win, 3-2 and advance to the championship round. In the title match, Samford once again faced ETSU, this time winning, 3-2 to win the tournament and the SoCon’s automatic NCAA Tournament bid for the third time in the last four years. Samford was led in the tournament by Most Outstanding Player Kelsi Hobbs, who was also named the league’s Player of the Year at the conclusion of the regular season.

The Samford men’s and women’s indoor track and field teams entered the SoCon Championships with high hopes, and neither team disappointed. Both teams led throughout and both earned the SoCon titles. For the women’s program, this was the fifth-straight SoCon Indoor Championship, while it was the first indoor title for the men’s program.

The Samford women’s basketball program entered the 2019-20 season with a new head coach and was not expected to do very well in conference play. The team, which had won just 10 games overall the previous season, was picked to finish seventh in the eight-team league. The Bulldogs, however, improved as the season progressed, and the team won a share of its first-ever SoCon regular-season title with a 70-53 win over Western Carolina in the regular-season finale.

Samford entered the SoCon Tournament as the No. 1 seed, and earned double-digit wins in both the first round (77-62 over Western Carolina) and the semifinals (75-45 over Furman). In the championship game, a late three-pointer by Natalie Armstrong and a layup by Charity Brown lifted Samford to a 59-54 win over UNCG, earning the program’s third SoCon Tournament title and NCAA Tournament bid. The team was unable to participate in the NCAA Tournament due to the COVID-19 pandemic.

Armstrong was named the SoCon Tournament Most Outstanding Player, and she and senior Sarah Myers were both named first team All-SoCon by both the coaches and media. The media also named Head Coach Carley Kuhns as the league’s Co-Coach of the Year.

Overall, it was a historic year of great success for the Samford Bulldogs.