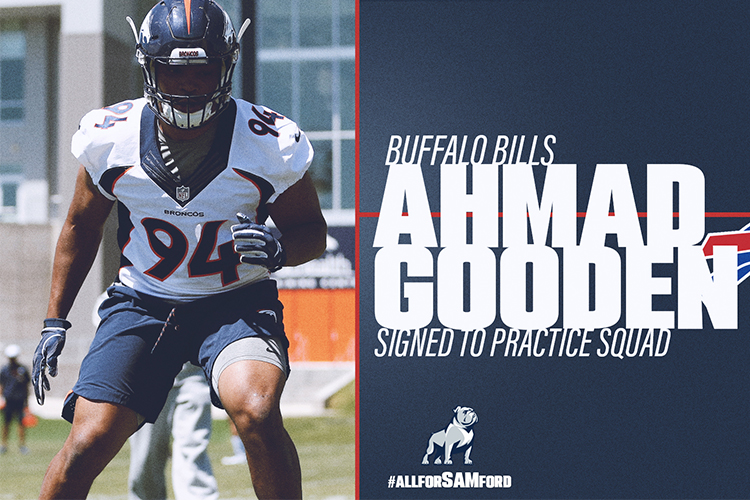 Former Samford defensive lineman Ahmad Gooden '19 has been recently signed to the Buffalo Bills' practice squad as a linebacker.

Gooden spent the 2020 offseason with the New York Jets before being released in August. He originally entered the NFL as an undrafted free agent with the Denver Broncos in 2019. He played in three career games with Denver.

Gooden played at Samford from 2015 to 2018. He posted an impressive 15 tackles for loss and 5.5 sacks as a senior in 2018. He had 49 total tackles, 12 quarterback hurries and four pass break-ups. He also recovered two fumbles, returning one for a 58-yard touchdown at Furman.

As a junior in 2017, Gooden earned SoCon Defensive Player of the Year honors after tallying 101 total tackles, 15.5 tackles for loss and 5.5 sacks. Gooden was a two-time All-American during his Samford career.

Samford has three players who are actively playing in the NFL this season, with James Bradberry playing for the New York Giants, Jaquiski Tartt with the San Francisco 49ers and Nick Williams with the Detroit Lions. Michael Pierce is currently with the Minnesota Vikings, but opted out of this season due to concerns over the COVID-19 pandemic. In addition, Devlin Hodges is currently on the Pittsburgh Steelers' practice squad.