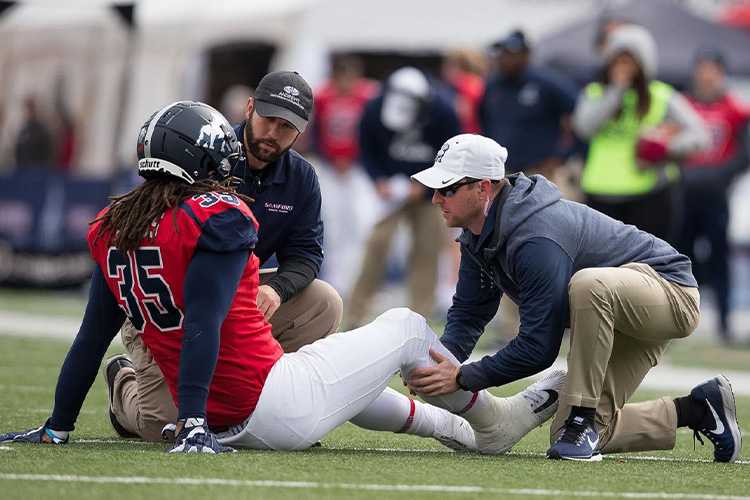 "It's a great honor, and I'm just very appreciative that people think I do a good job," Price said. "Obviously, I strive to do a good job, and for me, it's just about what I can do to make sure we're doing everything we can from a daily perspective for our student-athletes. I try to come every day to work and just see what I can do to make this place better each and every day, even if it's one small thing. I think that just goes to show that progress is slow, but if you keep at it, you'll eventually get there."

Price came to Samford in the summer of 2014 as the head football athletic trainer. He worked for former Samford head football athletic trainer Dan Jacobi at Marshall University in West Virginia the previous year. Jacobi and Callans told Price they thought the job at Samford would be a good fit for him. Price, a 2011 graduate of the University of Alabama, said he was excited to get back to his home state.

"They said we think this is a good fit because after working with you, your mindset and your philosophy of athletic training aligns with what they've established there, especially with Coach (Pat) Sullivan," Price said. "It was July 4th weekend and we tried to work around coaches' schedules and everything to plan a visit on campus. Everything worked out, I got on campus and interviewed and everything went really well. It was good to get back to Alabama."

Price did not know much about Samford before coming to work here, but he says he quickly learned to love the institution and what it stands for.

"Before getting here, I didn't know a lot about Samford, but had heard of it and the success they'd had with the football program and everything," Price said. "Once I got here, I got to know the culture of Samford and this community and the people that worked here too. I really fell in love with the people here. The staff and the student-athletes are great, and that means a lot. When you work 16 hours per day, you want to work with people you like. I think it's just been a perfect fit for me and the way that I practice as an athletic trainer."

Price and his staff played a major role when Samford brought back its student-athletes in late July. Price said a lot of planning and work went into making sure the student-athletes' return to campus was handled as safely as possible.

"There were a lot of meetings, a lot of planning that went into place," Price said. "It was a joint effort between our department and campus, so we met several times and discussed what needed to be done, how to prepare and how to bring everybody back safely, but also effectively. It really paid off. It seemed like a very smooth transition for that first time in July when we brought basically half of our athletes back. We did a really good job of testing them and being able to quarantine who we needed to, and isolate our positives and things of that nature."

Price said all of that preparation helped when the rest of the student-athletes returned when the fall semester began in late August.

"We used that time to really hone our skills and get ready for the rest of our student-athletes in August," Price said. "It was just one of those things where we were testing things out. We had never done this before. No one ever had. So we just took it day-by-day and saw what would work in real life, instead of just on paper. It was a good transition to get everybody back, and everything is running really smoothly right now. All of our athletes are back. They've really bought into everything that we've implemented, from the masks to the daily symptom checklist to the temperature checks and things of that nature. You can't ask for more than that."

The COVD-19 guidelines have changed the way every department works, and it has had a major impact on the way athletic training rooms are run. Price talked about some of the changes that have been made to the day-to-day running of the training room.

"We always try to have a very inviting environment in the athletic training room, and so, part of what has changed is that now we have to have appointments," he said. "There is now a limit to how many people can be in our rooms. So, now they can't just walk in to say hey, but now they have to have an appointment to come in, but we haven't seen any issues with that. It's actually made things really smooth in terms of getting athletes in and out effectively and efficiently.

"So, I think on that end it's really good, but we miss our athletes that come and hang out and things of that nature, but at the same time, it's what's needed to be done," Price said. "It helps us limit the amount of people in here, limit the amount of exposures, and we have time to clean between everybody coming in."

In addition to being in a relatively new role and dealing with the COVID-19 regulations, Price has had a major change in his personal life as well. He and his wife, Emerald Autrey Price, recently had their first child, Holden Robertson Price. Price praised his staff for helping him out while he was taking care of his wife and newborn baby.

"I have to give a shout out to my team, that's who's helping me out the most during this process," Price said. "I couldn't ask for a better team of athletic trainers and strength and conditioning coaches and everybody that works within the sports performance department. Everybody picked up the slack when I was out for a little bit on paternity leave. So, just thank you to my team, and I owe it to them because, without them, we couldn't do this. They helped me out tremendously."

Now in his seventh year at Samford, Price has had a remarkably positive impact on the care of Samford student-athletes.