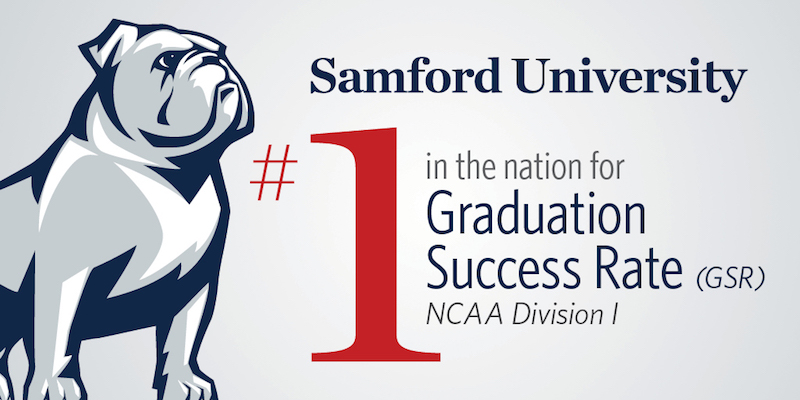 Samford was one of nine schools to score 99 on the latest GSR for all Division I student-athletes who began their college careers in 2013. Other schools include Columbia, Dartmouth, Evansville, Harvard, Lafayette, College of the Holy Cross, Loyola-Chicago and Yale. Samford has a long history of performing among the nation's elite universities for its combination of excellence in academic and athletic performance and has consistently earned an overall GSR above 90 percent since 2012.

The NCAA Division I Committee on Academic Performance implemented the initial release of the GSR in 2005 in order to more accurately assess the academic success of student-athletes. The most recent GSR measures how many student-athletes in the classes of 2010 through 2013 graduated within six years of their enrollment. Ten of Samford's teams earned perfect scores of 100 percent — baseball, men's basketball, men's golf, men's tennis, women's basketball, women's golf, softball, soccer, women's tennis and volleyball. Every Samford team was at or above the national average in the report, making Samford the only SoCon school to achieve that feat.

“We are extremely proud of our student-athletes for achieving such impressive scores,” Samford’s assistant director of Athletics for Academics Paige Mathis said. “The work that they have put in in the classroom has been outstanding, and these scores prove how dedicated our student-athletes are to performing at the highest level, not only in competition, but in the classroom as well.”