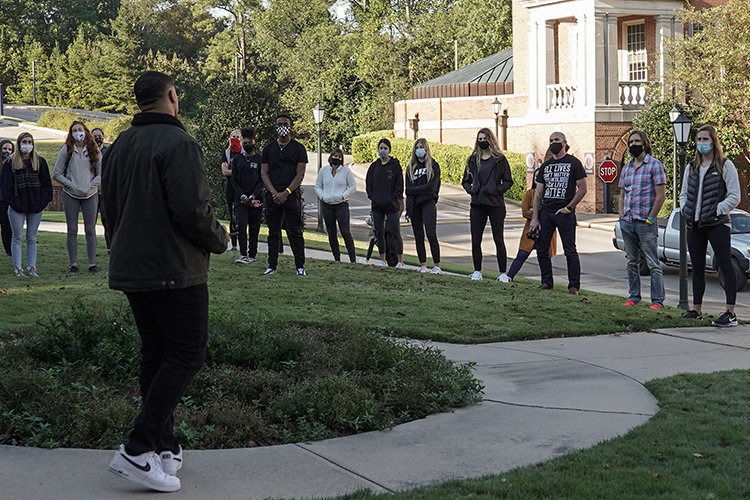 Approximately 250 Samford University students, administrators, trustees, professors and staff members participated in a March for Social Justice on the university’s campus Oct. 30. Participants were divided into four groups to allow for social distancing.

Jordan, who spoke and performed the song “Glory” by John Legend, said he felt blessed to be able to be a part of the event. "It's honestly a privilege,” he said. “I'm super honored. It's just been beautiful to be around people and learn so much because I've truly learned more being a part of this than anything. I'm just grateful to be a part of it.”

Jordan said he hopes the event’s message will be one of unity, and not create more division. “I hope people understand, most of all, that we're not trying to put Black lives above other lives, we're just trying to say that Black people have been oppressed for years and years now and that we just want equality for all," he said. "We have to pay attention to the people that are being oppressed and try to help those people out. I just pray that people understand that we need their support in this movement, that we need their love."

DeVries, who shared tips on being an ally, said she was asked by some of her students to speak at the event. She said she hoped the march was a meaningful event, especially for the students involved. “Honestly, I considered it a real honor to be asked by the students, and I didn't want to let them down,” DeVries said. “I hope that this sets a precedent of doing right by all of our students in a way that is meaningful. I hope the students feel heard and that their priorities are met.”

Samford's Office of Diversity and Intercultural Initiatives helped plan the march. JeNorri Armstead, the office’s director of diversity and intercultural initiatives for Athletics, said the event was an important one for the entire Samford University campus. “It just means a lot to see the community come together,” she said. “The student-athletes, the students, the faculty, the staff and the trustees coming to support this event is just awesome for us. They have all just come together in unity.”

Armstead said she was excited about the turnout for the march, and hopes people understand that the work for social justice is ongoing. “I just want people to really listen to what the speakers are saying,” she said. “I want them to understand that this is not a one-time thing, that this is an on-going event that has to take place daily in our hearts. It's in the way we treat people, the way we act. It just has to be the first thing in our minds, a daily change of heart.”

Thomas, who spoke about the Christian moral imperative of social justice and the needs of underrepresented community members, hopes that attendees feel empowered to work toward social justice after marching.

“My hope is that participants feel empowered to work towards social justice and from a Christian moral mandate. Social Justice has to be a kingdom issue committed to by Christian institutions and Christian individuals,” he said. “Our student leaders in Black Student Union and ACE have initiated a conversation that will prayerfully gain an audience on our campus so that Samford University may lead the charge in Christian higher education to affirm and prepare our students to be leaders in the next generation.”