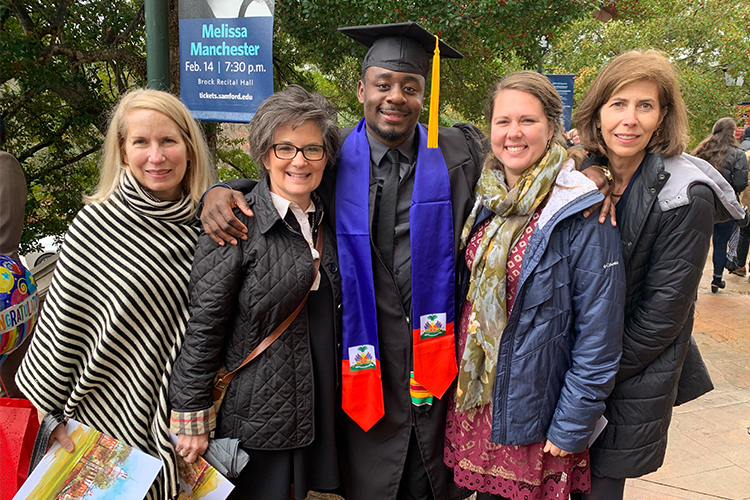 Since 2006, Samford First Lady Jeanna Westmoreland has served as executive director of the Legacy League. This 800-member volunteer organization works to provide life-changing scholarships to Samford students with significant financial need. While her tenure in the role will end with University President Andrew Westmoreland's retirement, her mark on the organization is indelible.

In tribute to her service and to continue the critical work to which she has dedicated her life, the Legacy League has established the Jeanna King Westmoreland Legacy League Scholarship. Like all Legacy League scholarships, the new scholarship bearing her name will change the lives of students who have faced challenges including homelessness, inner-city violence, foster care, the death or disability of a parent, abandonment and the sacrifices of full-time ministry.

"I am so grateful for all the gifts our gracious God placed within Jeanna - faith, wisdom, discernment, encouragement, teaching and leadership which have been so invaluable to the growth and ministry of the Legacy League,” said Legacy League president Kathy Clay. “She is a phenomenal mentor whose wealth of experience and knowledge will be greatly missed. It is so appropriate to recognize Jeanna's impact on our organization, university and as an advocate for students and education by honoring her Samford legacy with the naming of this scholarship."

Over her 15-year tenure, Westmoreland led the organization through a time of incredible growth, including an increase in total endowment by approximately $3 million and the addition of 27 new endowed scholarships. Her guidance also spearheaded the significant expansion of ministry to scholarship recipients and led to the involvement of 350 active volunteers.

"Dr. Jeanna Westmoreland led Samford Auxiliary to totally refocus its mission toward those individuals who are in dire circumstances in every aspect of their life," Fenton said. "The opportunity for them to gain an education at Samford University, as well as to receive the love and encouragement that Jeanna led us to exhibit to these students, creates a future which defies their imagination. Thus Samford Auxiliary, with this new and clarified vision, attracted many new members and was transformed into Samford Legacy League under Jeanna Westmoreland's leadership."

Contributions to the Jeanna King Westmoreland Legacy League Scholarship may be made online.

Learn more about the Legacy League.