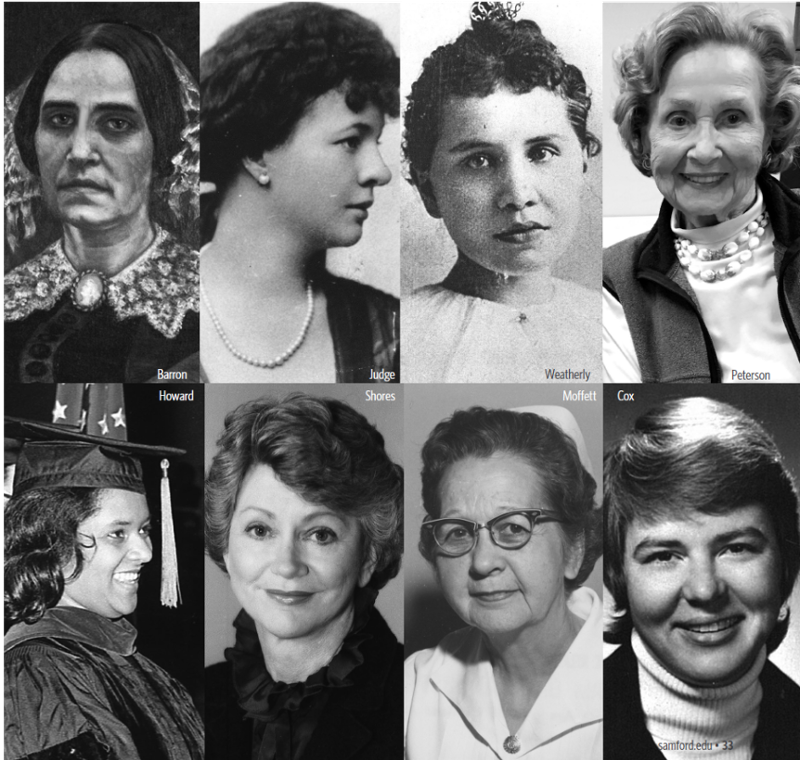 March is Women's History Month, and Samford is celebrating the impact and contributions of its female pioneers. Below, you'll find milestones and female firsts throughout university history.

Julia Tarrant Barron is considered the founding mother of Howard College, now Samford University. As such, she represents the first of a number of significant “female firsts” in Samford history. Barron was born in South Carolina but moved with her family to Alabama, then a territory, at a young age. In 1828 she married William Barron, a prosperous businessman in Perry County, Alabama, which had become a state in 1819. William died in 1832, leaving Julia with a large estate. Barron became one of the wealthiest women in the town of Marion, well respected in the community and a prominent member of Siloam Baptist Church. In 1841 she discussed the idea of starting a college for men with James H. DeVotie, the church pastor. She subsequently provided the land on which the college was built, according to a history of the school by James F. Sulzby. Barron is believed to have helped recruit the school’s first president, Samuel Sterling Sherman, and she is credited with being at the head of the school’s donor list. The Alabama Baptist newspaper, which Barron cofounded, described her as being the school’s first donor.

It would be more than half a century before the school recorded its first female graduate. Anna May Judge attained that distinction in 1896 followed by Alice Eugenia Weatherly in 1898. These women were true pioneers because Samford did not become coeducational until 1913.

Dean of Women and Professor

In fall 1913, Mrs. J. C. Hockett was appointed acting dean of women as the school formally admitted female students. The next fall, Hellen Manly Patrick was appointed dean of women and assistant in the English department. Patrick served one year before resigning for health reasons. In 1915, Nannie Merle Hiden became dean of women and was also appointed professor of education. In that role, she oversaw what was then the education department, becoming the first woman to lead an academic department at the school. The decade of the 1920s saw important firsts for women. The first women’s intercollegiate athletic team, for basketball, was formed in 1921.

Board of Trustee Member

The first female member of the school’s Board of Trustees, Mrs. Charles J. Sharp, was appointed in 1926. She also served as president of the Women’s Auxiliary, forerunner of today’s Legacy League.

Emily Cate became the first women’s instructor in the athletics department in 1930, when gym classes became required for all students. Cate organized the Women’s Athletic Association and taught swimming. In 1930-31 women took part in hockey, basketball, track, tennis, swimming and hiking. Later, in 1934, Cate was promoted to director of physical education.

Margaret Ann Miller Peterson in 1946 became the first female Student Government Association president without intending to. She campaigned for vice president alongside her friend, J. B. Davis. Both won, but Davis—a member of the Navy V-12 program—was transferred to another university after the election, and Peterson became SGA president. “I was really shocked,” she said during a 2017 visit to campus. “I hadn’t planned to do anything except help him! Then I had to get busy.”

Audrey Gaston Howard in 1967 became the first African American student to enroll at Samford as a student at Cumberland School of Law. She earned her degree in 1970 and became the first woman appointed to the U.S. Attorney’s Office in the southeast. Later she was appointed courts liaison adviser to the staff of the National Criminal Justice Commission before serving as a legislative assistant to U.S. Representative John Buchanan of Alabama.

Janie Shores, a Samford graduate, became the first female law professor at Cumberland and in the state of Alabama in 1968 and was the first female elected to the Alabama Supreme Court in 1974, serving four terms. She was named Samford Alumna of the Year in 1983.

Ida V. Moffett was the first female for whom an academic school was named in 1968. Ida Moffett School of Nursing became a part of Samford in 1973. Moffett, who served the nursing profession for more than 70 years, was the first woman involved in achieving a nursing school accreditation in Alabama. (A second academic entity, the education school, was named for a woman, Orlean Bullard Beeson, in 1978.)

Martha Ann Cox became Samford’s first female vice president in 1984 with additional duties as dean of students. Cox served Samford in various capacities during a 38-year tenure at the university. She was named Alumna of the Year in 2006.

This story was originally published in the Summer 2019 edition of Seasons magazine, and is based on a Women’s History Month program presented by Betsy Holloway, Samford vice president for marketing and communication. Additional research was conducted by Jennifer Taylor.