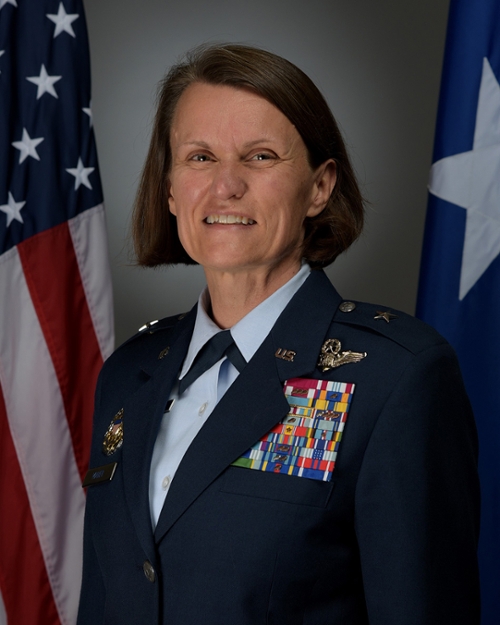 Samford was pleased to welcome Brigadier General Leslie A. Maher for a visit with campus leaders and Air Force ROTC Detachment 012.

Brig. Gen. Maher, who was appointed Commander of the Jeanne M. Holm Center for Officer Accessions and Citizen Development at Maxwell Air Force Base in May 2020, was enthusiastic about her first trip to campus since the start of the COVID-19 pandemic.

“This was truly the highlight of my week,” said Brig. Gen. Maher. “A personal visit is so crucial in understanding how each detachment fits into its university structure and its faculty, and to see its successes and challenges.  I found my detachment is well taken care of, cherished by the university leadership and is on a path to success in building tomorrow’s leaders.”

Brig. Gen. Maher joined President Westmoreland and Lieutenant Colonel Josh Payne, commander of ROTC Detachment 012, for a mission brief on the program at Samford and its approach to cadet training, as well as a discussion on current and future initiatives between Samford and the Air Force ROTC.

Lt. Col. Payne stressed the importance of the visit. “It’s always significant when a senior leader visits your unit. As a commander, it is a fantastic opportunity to feature the great work that we do here at Samford and the high caliber of our cadets.”

During her visit, Brig. Gen. Maher met with Detachment 012 to offer valuable insights on leadership and service. She also helped honor the dedication of three current cadets: Rebecca McCoy, Dana Oglesby and Jake Moultrie. Her time with the group served to reinforce the detachment’s theme of the semester, Pursuing Excellence.

“Her message to the cadets validated the culture that we have been building,” said Lt. Col. Payne. “She highlighted the importance of leadership to the Air Force mission, and challenged them to be professional, accountable, and dedicated to their roles as leaders.”

Brig. Gen. Maher also provided updates on the impact of COVID-19 and, notably, the recent announcement that the new U.S. Space Command headquarters will be located Huntsville, Alabama—a move that will likely provide future opportunities for Detachment 012.

“What a partnership opportunity for us,” said Brig. Gen. Maher. “Huntsville has so much to offer, not only to the space community, but also to their families by way of great schools and employment opportunities.  Now our work begins to see what that means for the future of the ROTC enterprise.  We will be seeking new ways to collaborate to attract the best talent this community has to offer to both the Air Force and Space Force.”

Prior to her current assignment, Brig. Gen. Maher served as the Commander of the 375th Air Mobility Wing at Scott Air Force Base and later as Senior Military Assistant to the Secretary of the Air Force at Air Force Headquarters at the Pentagon. She has participated in numerous operations during her career, including operations Southern Watch, Allied Force, Noble Eagle, Desert Fox, Enduring Freedom, Iraqi Freedom and the relief efforts in support of Joint Task Force-Matthew.

The program’s leaders recognize the advantages that hosting the detachment at Samford provides.

“Samford is a perfect host for Air Force ROTC,” said Lt. Col. Payne. “The support that we receive from the University and surrounding community enables us to execute our mission of producing officers of character for the United States Air Force and Space Force.”