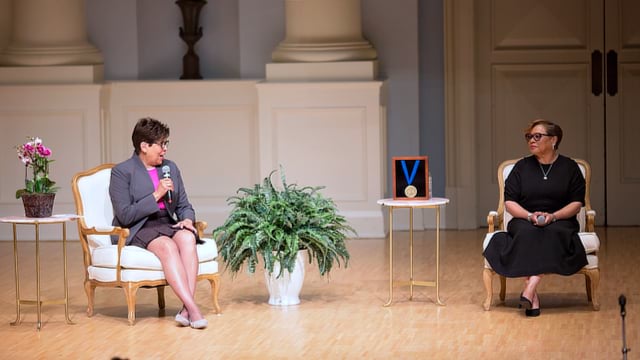 On Tuesday, March 9, 2021, Samford University’s Office of the President, the Office of Diversity and Intercultural Initiatives, and the Frances Marlin Mann Center for Ethics and Leadership joined together to present “A Morning of Empowerment.” As part of the university’s Lead with Love series, and in commemoration of Women’s History Month, this event aimed to inspire and empower young leaders on Samford’s campus and beyond.

“We wanted this event to be a time of motivation and empowerment for our campus community,” said Denise Gregory, assistant provost for diversity and intercultural initiatives. “As the first females to serve in their roles, these ladies’ leadership is a testament to their unwavering grit and hard work. They are true inspirations for all of us, especially for our students who aspire to be leaders in the workplace and in their communities one day.”

Following introductions, Samford University President Andrew Westmoreland joined the honorees for an informal interview to discuss their institutions and presidencies, what motivates and inspires them, challenges they face in their roles, plans for the future of their universities under their leadership, and much more.

Knight offered her gratitude to Samford for the event. “Thank you for this wonderful opportunity. I am honored and humbled that you are recognizing us. We have this ‘sister presidents’ bond, and we’ve enjoyed getting to know one another.”

Halfway into the interview, Westmoreland approached the women with the question, “What is it that a college president does?”

Warrick summarized the role when she responded, “We do it all. We set the vision and we have to be the model of the behavior you want to see. So, we recruit, we teach, we mentor…we do it all in order to demonstrate…that we are relevant and what we do is important, very important, especially in our community, in Alabama, and in the nation. What college presidents do is so important because we are that critical place that determines careers, it determines people’s futures, they [students] meet their husbands and wives [on our campuses], there’s just so much that happens in college and we’re the leader of all of that.”

The discussion continued on to address balancing their responsibilities as university presidents with their dedication to community, their hopes and concerns surrounding the future of racial equality, and the relationships our institutions share.

At the conclusion of the interview Westmoreland presented each president with the Mann Medal, one of the highest levels of distinction awarded by the university through Samford’s Frances Marlin Mann Center for Ethics and Leadership.

“Unlike awards that honor personal characteristics of specific leaders, the Mann Medal recognizes achievements by individuals, groups or organizations that contribute to a more just and ethical world,” said Allison Nanni, associate director of the Mann Center. “We are pleased to honor important work of all three exemplary women who inspire and challenge others to follow their example.”

The event was livestreamed and a full recording is now available. Watch the entire discussion here.