Love and Leadership in the Public Square: Keith Caps Off Lead with Love Series 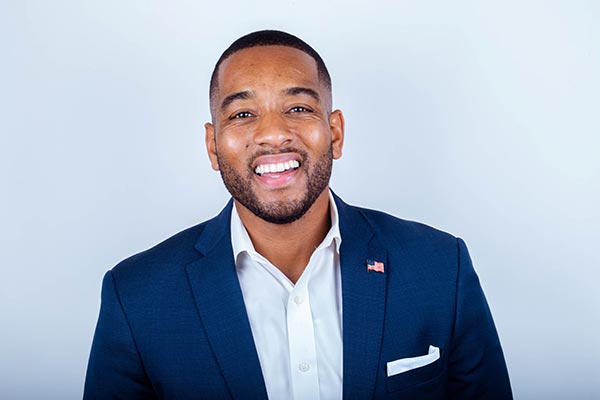 Samford University’s Office of Diversity and Intercultural Initiatives wrapped up their spring 2021 Lead with Love Series in April. The special convocation event on April 13 featured Devyn Keith, a member of the Huntsville, Alabama, City Council. Keith, a 2012 graduate of Samford’s Orlean Beeson School of Education, spoke to his Samford family on “Love and Leadership in the Public Square” and how his experience with using love as a tool to expand his knowledge, friendships and growth have empowered him.

To Keith, love is more than just a four-letter word. It is an action—a tool that Keith uses to lead, as well as one that he feels should often be fine-tuned.

As the focal point of the third and final Lead with Love event of the semester, Keith highlighted how love for others began as a struggle until he uncovered the depth behind its importance.

He recalled a meeting with a man displaying different views but a common interest that sparked a long-standing friendship. “A friendship that began over the frustration of a neighborhood pothole and a love for red velvet cake was the beginning of planting a seed for identifying connections and commonalities. It was a bond that may not have been introduced without an optical view guided by love.”

Keith attributes many of his achievements to connections made by opening his views and leading with love during his Samford experience where he cultivated friendships that led to business opportunities and financial and personal success and development.

“Devyn represents the best of the Samford community. It indeed was an honor to host him on campus, as he shared in our Lead with Love series,” said Cam Thomas, director of diversity enrichment and relations. “Throughout this series, our speakers and honorees continued to inspire and challenge us all. To step beyond the unknown of vulnerability with the aspiration to connect with our community. I hope that our participants could hear the intentionality needed to be community change agents. Devyn provided the framework for how that is embodied even in his public service.”

Born and raised in Huntsville, Alabama, Devyn Keith was re-elected to a second term as a Huntsville city council member in August 2020. During his first term, he set a record as the youngest council member elected to Huntsville’s legislative branch of government. Keith represents District 1, an area that covers much of northern Huntsville including Alabama A&M University and stretching into the city’s downtown. At Samford, Keith played on the football team. While in Birmingham, he launched the nonprofit Brothers of 1 Voice, an effort aimed at educating, empowering and advocating for youth who aged out of state support services. After graduating from Samford, he pursued graduate education and received a Master of Public Administration from the University of Massachusetts in Boston. While in Boston, he developed working relationships with leaders at the federal, state and local levels, learning innovative ways to effect meaningful change with tangible impact. In addition to his role in the council, Keith is an assistant professor in the Department of Political Science at Alabama A&M University and currently serves on the Board of Directors for the Cap & Gown Project, a Huntsville-based nonprofit seeking to provide opportunities and mentorship for underrepresented secondary school students who wish to pursue a college education.