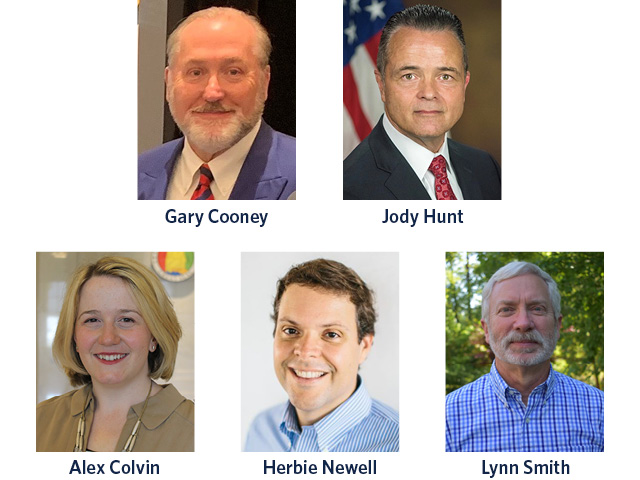 Samford University has named the five outstanding alumni who will be honored as the 2021 alumni awards recipients. The honorees will be celebrated during Homecoming weekend, which will take place Nov. 5-6.

Cooney, who has served as a Samford Overseer, is also a member of the Brock School of Business Advisory Board. He played football for the Bulldogs when he was a student and was inducted into the Samford Sports Hall of Fame in 2019. He lives in Dallas, Texas.

Hunt, an attorney who currently practice at Alston & Bird, LLP, recently served as the United States Assistant Attorney General for the Civil Division, a position he was nominated for by former President Donald Trump. He served in this role from September 2018 until July 2020.

Prior to this, he worked in private practice, where he conducted corporate investigations and coordinated nationwide class actions. He also clerked for the Honorable James H. Hancock of the Northern District of Alabama.

Hunt, who was valedictorian of his class, received his Bachelor of Arts degree from Howard College of Arts and Sciences. He earned a Master of Arts from Florida State University in 1984 and a Juris Doctor from Columbia University Law School in 1989.

Outstanding Young Alumna of the Year

Alex McClure Colvin, Ph.D., ’12, is the 2021 Outstanding Young Alumna of the Year. Since 2019, Colvin has served as the curator of public programs for the Alabama Department of Archives and History (ADAH). In this role, she has worked on the Alabama Women’s Suffrage Centennial Committee, which commemorates the ratification of the 19th Amendment to the United States Constitution, which federally guaranteed American women the right to vote. She also helped to craft the ADAH’s 2020 Symposium about women’s suffrage in Alabama, which has been delayed to this summer due to the COVID-19 pandemic and created the exhibit Justice Not Favor: Alabama Women and the Vote, which will open to the public later this year. Additionally, Colvin serves as the state contact for the National Votes for Women Trail, a project of the W. Pomeroy Foundation placing roadside markers in all 50 states.

Prior to joining the ADAH, she worked at the Hermitage, the home of President Andrew Jackson in Nashville, Tennessee, updating and digitizing the collections and reorganizing the staff research library there. In 2014 she worked for the National Park Service’s Mapping Removal Project, creating maps for 1790, 1810, 1820 and 1840 that illustrated the changing borders for 62 Federally Recognized Tribes.

From 2017 to 2019, Colvin served as content specialist and traveling scholar for the Alabama Bicentennial Education Initiative. In this capacity she developed the program on Indian Removal in Alabama to be used in educational institutes, teaching participants how to incorporate primary sources into their teaching and draw connections between their communities, state and nation.

Newell is the president and executive director of Lifeline Children’s Services, a Birmingham-based organization that provides adoption services, cares for women who are considering adoption, supports and cares for orphans around the world and helps families reunite.

He joined lifeline as executive director in 2003. From January 2004 to December 2008, he served as the president of the Alabama Adoption Coalition and was chosen as a Hague Intercountry Adoption evaluator and team leader by the Council of Accreditation. Under Newell’s leadership, Lifeline has increased international outreach to 25 countries through adoption and strategic orphan care, obtained licensure in 12 states, attained membership into the ECFA (Evangelical Council on Financial Accountability), and established the foster care arm at Lifeline.

Having witnessed the plight of older orphans on many international trips, Newell’s burden for the fatherless was a catalyst for forming (un)adopted in 2009, Lifeline’s strategic orphan care ministry focused on equipping orphaned and vulnerable children with life skills needed to bring about community transformation.

He holds a Master of Business Administration in Accounting from Samford. Prior to joining Lifeline, Newell worked as an independent auditor for accounting firm WAKM Companies, LLC.

Smith graduated from Samford with a degree in psychology and went on to the University of Alabama at Birmingham where he earned a degree in electrical engineering. He worked for Southern Company until retirement, but always made time to volunteer with various organizations and help those in need.

In retirement, he became the technical assistant with Hope Manifest, a Birmingham-based non-profit that helps teach others how to organize, run and succeed in their own non-profit organizations. Through Hope Manifest, he started volunteering with EDGE in Louisville, Kentucky, doing hand pump repair training. EDGE sends volunteers around the world to repair broken hand pumps that were originally installed by organizations such as UNICEF. Smith has traveled with EDGE to India, Haiti and various locations in Africa, restoring water to thousands of people in these countries and training others on how to do this work on the ground.

He also volunteers with MedWater, based in Louisville, Kentucky, which provides clean water, especially related to medical issues, to people around the world. Smith and a few friends created a way to use old computer power supplies to run a chlorinator using simple table salt. He takes these chlorinators to remote villages and installs them, teaching locals how to use them to provide safe drinking water to their communities.