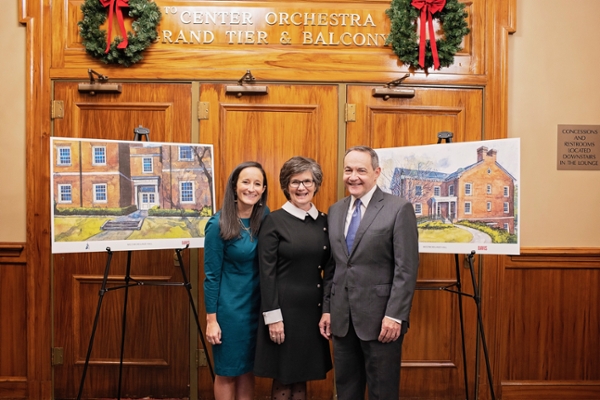 Today, Samford honored the legacy of two of the university’s most impactful leaders.

The University’s Board of Trustees announced the naming of the University Center Annex as Westmoreland Hall in honor of the service of President Emeritus Andrew Westmoreland and former First Lady Jeanna Westmoreland. The space was renovated in 2019 to serve the needs  and functions of the university’s Student Affairs Division.

The announcement was a surprise to the Westmoreland family.

“I began my work 42 years ago in student life. That was my first entry into higher education. For this particular building to bear my name is about as meaningful a thing that could have happened,” President Emeritus Westmoreland said. “It has been an extraordinary day and a really blessed career. We are grateful for all of it. We’ve been grateful from the beginning of our time at Samford for all we have experienced here. Jeanna, Riley and I truly believe we are better people because of the influence of so many at Samford.”

The official portrait of President Emeritus Andrew and Dr. Jeanna Westmoreland was also unveiled. The portrait was commissioned by the Board of Trustees and painted by nationally acclaimed portrait artist Ellen Cooper. The portrait will hang on the first floor of the Harwell G. Davis University Library.

“It is a wonderful recognition of service that I love and enjoy doing and have been blessed to be a part of,” Stevens said.

The day also included a ceremonial ribbon-cutting to dedicate the renovation of Samford Hall.  Office space throughout the building was renovated for the first time since Samford Hall was constructed in 1955. Along with the William J. Stevens Board Room, other renovations include updated office space for Accounting and Financial Services, Human Resources, Business Services, Marketing and Communication and Institutional Research and Analytics. New life safety, mechanical, electrical, plumbing, data and audio-visual systems were installed throughout the building.

The university is grateful for the service and contributions of these historic leaders.