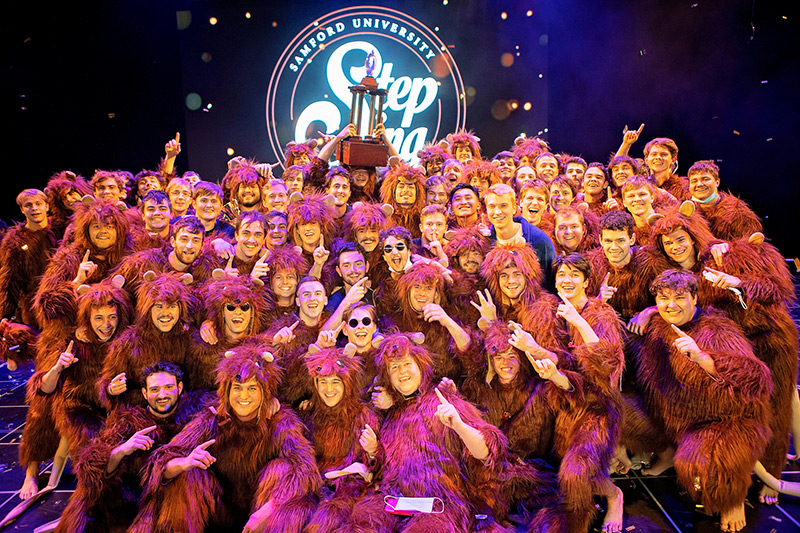 After not being able to hold Step Sing last year due to the COVID-19 pandemic, the beloved tradition at Samford University returned Jan. 27-29. More than 1,300 students in 17 groups performed four shows, with Pi Kappa Phi fraternity earning the coveted Sweepstakes Award.

“Having been cancelled in 2021, the best part of Step Sing was that it was back. The energy, excitement, and enthusiasm from the more than 1,300 students involved in the show was a highlight this year,” said Lauren Taylor, assistant vice president for campus and residential life.

“Participating in Step Sing means making more friends than I thought I would ever make in three weeks, having the most fun being hyped up during the Saturday Sweepstakes show, and creating memories that will last long after I graduate,” said Ansley Burnette, a senior who directed the Independent Ladies performance. “Though this was my last time participating in a Step Sing show, I already look forward to coming back to the Wright Center to watch from the audience or having a live-stream watch party with other Samford alumni.”

Lythgoe is the producer of American Idol and has received three Emmy nominations and a People’s Choice Award for his work on the show. He is also the president of Legacy Productions, recently inked a co-production deal with Critical Content, where they are currently in production for a major network pilot with his fellow executive producer and music icon, John Legend.

Smith is a nationally recognized singer, songwriter and musician, as a well as a Grammy-nominated producer and vocal coach/vocal producer to some of the most distinctive voices in the music business. Her clients have included Usher, Rob Thomas, Shania Twain, Justin Bieber, The Band Perry, Jill Scott, India Arie, David Crowder, Tasha Cobbs-Leonard, Sugarland, Drake and many more.

Step Sing originated on the steps of Renfroe Hall on Samford’s East Lake campus before the university relocated to its present location in the late 1950s. It was held in the gymnasium of Seibert Hall and other locations around the Homewood campus before finally landing in Wright Center in 1976.