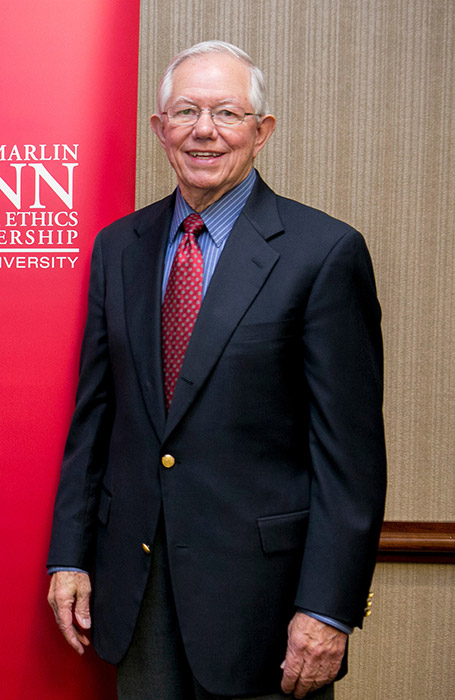 Marvin Mann ’54, an esteemed alumnus and benefactor of Samford University, died on Saturday, March 19. Mann, who provided generous funding for the creation of the Frances Marlin Mann Center for Ethics and Leadership and whose significant gifts to the university will continue to impact students for years to come, was a beloved member of the Samford community.

Mann, a Birmingham native and 1954 Samford graduate, worked 32 years with IBM before helping to found Lexmark International, Inc. in 1991 where he served as chief executive officer and chairman until 1999.

“From the day I met Marvin Mann, I knew that he would become a mentor and friend. His incredible success as a corporate executive was matched only by his humility, faith and care for others,” said President Beck A. Taylor. “Marvin’s impact on Samford has been and will continue to be transformative as students benefit from the scholarships and centers in Marvin and his wife, Frances’, name. Samford is stronger and lives into its mission more faithfully because of Marvin’s love and commitment to this place.”

“Without doubt, Marvin Mann was one of the most significant of Samford’s many esteemed graduates of the past 180 years,” said President Emeritus Andrew Westmoreland, who also serves as the executive director of the Frances Marlin Mann Center for Ethics and Leadership. “His impact will endure and expand as future generations of students live and learn at Samford.”

In 2008, the Frances Marlin Mann Center for Ethics and Leadership was created thanks to a gift from Mann. Named after his beloved late wife, the center is an endowed, university-wide unit that promotes student development and enriches teaching and scholarship in the university’s ten academic schools.

“Mr. Mann, who offered the endowment for the center in honor of his wife, wanted the programs to reflect the lessons of respect, integrity and virtuous living that came to be hallmarks of his own personal and professional development,” Westmoreland said. “He wanted each student to be imbued with a sense of moral responsibility and ethical behavior.”

The center provides resources to students, faculty, staff and Alabama nonprofits in order to promote the understanding and practice of positive character and servant-leadership. Mann’s legacy and vision continues today.

Since its founding, the Mann Center has established more than 130 community partnerships, created 180 engaged learning courses and currently provides more than 30 weekly volunteer opportunities each semester.

Mann received several of the university’s most esteemed honors, including Alumnus of the Year in 2004 and Samford’s first Ethics-in-Business Award in 2006. The award, which was renamed as the Marvin Mann Ethics-in-Business Award, recognizes individuals who embody professional achievement and personal integrity, who display an uncommon commitment to leadership through service, and who have left their marks of influence on institutions and industries without compromising Christian virtue or charity. He also received an honorary doctorate in commerce from the university in 1993.

A funeral service for Mann will be held on Samford’s campus in Andrew Gerow Hodges Chapel on Saturday, April 2 at 11 a.m. It will be followed by a reception in Beeson Student Commons. The campus community is welcome to the service and the reception.