More Than 1,200 Donors Contribute to 10th Annual Big Give Campaign 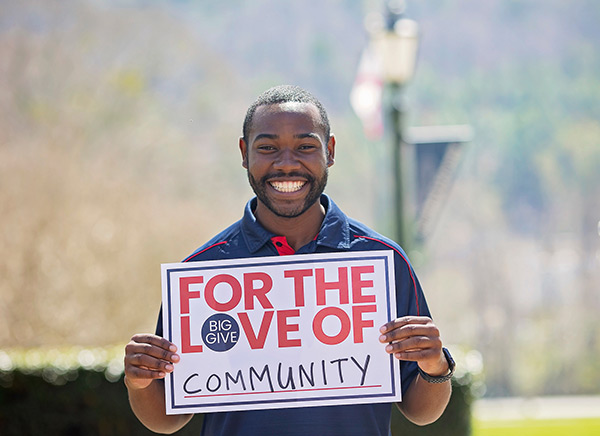 Thanks to the generosity of 1,286 donors, $173,891 was raised to support Samford University during the 10th annual Big Give campaign April 5-6. The 36-hour crowdfunding campaign allows students, employees, alumni and friends of the university to donate to areas of one’s choice.

The theme of this year’s Big Give focused on giving “for the love of Samford,” which is in reference to President Beck A. Taylor’s calling for the university to be “rooted and grounded in love,” as written in Ephesians 3:16-19.

“The Big Give is a tangible way for our alumni, faculty, staff, parents, students and friends to do something ‘for the love of Samford,’” said Randy Pittman, vice president of university advancement. “It is encouraging for those of us who serve here to see so many coming alongside of us with such a generous spirit.”

Since the first Big Give in 2012, the crowdfunding campaign has grown in the past 10 years in both the amount raised and the number of participants.

“Our goal for the first Big Give was just $10,000,” said Kimberly Cripps, director of stewardship. “What began as an opportunity to engage alumni and friends in a new, exciting initiative has grown into a generous outpouring of support to include students, faculty and staff as well.”

Over the past 10 years, Samford has raised more than $1 million to support students and the institution.

“These gifts have come from several thousands of donors, many of whom made their first gifts to Samford by responding to a text message, an email, or a social media post,” Pittman said. “The Big Give has been a fun and rewarding way to encourage involvement by so many Samford friends.”

Seeing students participate in the Big Give by donating in honor of faculty members or fellow classmates has been especially rewarding to Cripps.

“They showed their love for Samford and for each other by giving of their time and treasure to ensure the Samford experience is available for years to come. To see this type of selfless outpouring—it always brings us joy because the end result is a ripple effect that spreads to our students, and to the communities and people they will one day serve,” Cripps said.

The Samford Black Alumni Association kicked off donations during the annual African American Alumni and Friends Luncheon on April 4. During the event, attendees donated and held signs explaining who or what they made donations in honor of.

For more information about the Big Give or to learn more about how to give to Samford, visit the Giving Opportunities webpage.