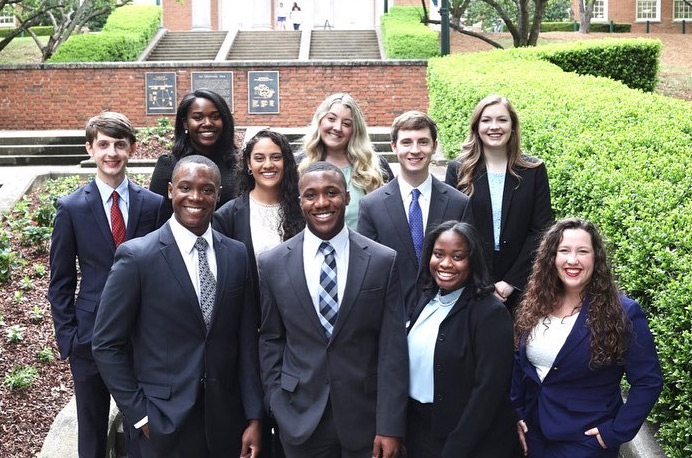 The incoming 2022-2023 student government leaders at Samford University were sworn in on Wednesday, April 20 during the annual Student Government Association (SGA) inauguration ceremony. Micaiah Collins, a rising junior, will serve as president, and James Jefferson, a rising sophomore, will serve as vice president.

Students, faculty and the newly elected SGA members gathered in the Leslie S. Wright Center for the inauguration. President Beck A. Taylor addressed the incoming officers with a video message.

“I am excited about next year,” Taylor said. “We pray, with the pandemic in our rearview mirror, we can lean into the year with all of the energy and excitement we can muster. Unlike your predecessors, who had to be patient with a new president, still using his Samford training wheels, you all have a more experienced partner in me, and I look forward to coming alongside in any way I possibly can.”

Taylor shared that he, like the newly elected executive board, is new to his role and acknowledged the diligent efforts of those who came before. Likewise, the previous executive board had to deal with many challenges facing the university, navigating a pandemic as well as their coursework.

“There were, of course, challenges, as there are always challenges when serving in leadership positions,” said Tyler Kendall, who served as SGA president for the 2021-2022 term. “But I feel that it is those challenges that have pushed me to be the leader and man I am today. I am so incredibly grateful for my experience as SGA president and I would not change it for anything”

Along with Collins and Jefferson, Andrew Mintz was elected as the vice president for events. The newly appointed executive team also includes Dionna Davis as the chief justice, Jada Hunter as the chief of staff, Callie Morrison as the press secretary, Cooper Shull as the treasurer, Meera Patel as the chaplain, Anna Rose Honea as the director of Freshman Forum, and Jadyn Kilgore as the executive director of diversity – a new position created by the SGA executive board in 2022.

Several awards were presented during the ceremony, including the SGA Career Achievement Award, and two new awards: the Spirit of SGA Award and the Dr. Eric L. Motley Elevate Others Scholarship.

The SGA Career Achievement Award is voted on by the Senate committee chairs and serves to honor one male and one female who have made serving the student body through the SGA a high priority.  This year’s recipients are sophomore and incoming SGA President Micaiah Collins and graduating senior and outgoing Vice President for Events Caroline Coleman.

The Spirit of SGA Award is selected by the SGA advisor and is in recognition of an SGA officer who makes a sustained effort to lead with a spirit of love, enthusiasm and compassion. This year’s recipient is graduating senior and outgoing SGA President Tyler Kendall.

The Dr. Eric L. Motley Elevate Others Scholarship was presented to incoming SGA President Micaiah Collins. The award, which is named for Samford’s first Black SGA president,  is given to a male or female from an underrepresented student group who has exhibited exceptional leadership skills.

As the new executive board looked to the year ahead, Dr. Taylor shared his insights on the  ultimate example of leadership.

“Jesus was the greatest leader the world has ever known,” Taylor said. “He led others with grace and compassion, with humility and patience. You will need extra doses of all of those things next year. Jesus also led with strength, wisdom, character and clarity of mission. If you are to be successful, you will need healthy amounts of those things as well. And finally, Jesus always had an eye out for those who are overlooked, who were invisible and neglected, he noticed the people for whom the systems and power structures of the day ignored.”

The SGA is committed to representing and promoting student interests in the decision-making process of Samford University. Collins says he hopes to emulate this commitment in his new role.

“I am blessed and honored to serve alongside a group of student leaders who has a passion for serving the student body with excellence and love,” said Collins. “I look forward to seeing how we will use our unique, God-given gifts to enhance the student experience on campus.”

As a new dawn of student leadership begins to break over the hills of Samford’s campus, Dr. Taylor’s words echo in the hearts of Samford students and faculty alike.