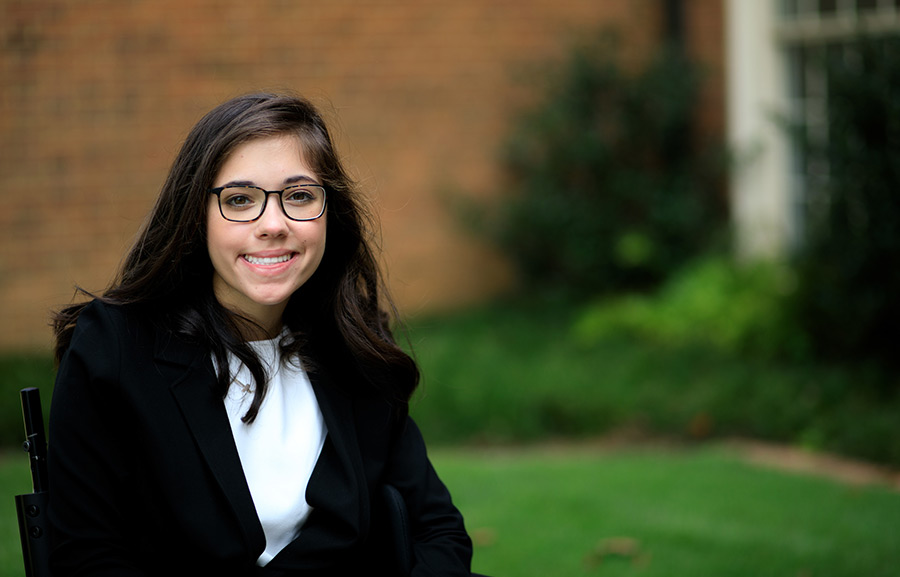 Students from Samford University were featured in the newest marketing campaign for the Council for Christian Colleges & Universities (CCCU). The campaign, called “Journey to Distinction,” is dedicated to telling the stories of Christian college students with the goal of sharing what God is doing in the lives of young men and women at Christian colleges and universities and how their college experiences prepared them to succeed beyond graduation.

Morgan Champion ’21 and Justin Stuckey, a senior, were both featured. Stuckey, who will graduate in late April, is a two-time All-American and competes in the high jump. He also made his first Olympic trials appearance last June. Stuckey says being a member of the men’s track and field team at Samford is something he never expected to do but is an experience he is his grateful for.

“I didn’t expect to do track ever in college. I didn’t have track dreams,” Stuckey said. “The blessing and opportunity to have Christ incorporated into our daily walk—understanding that when He opens a door, you have to go through it. Don’t try to close a door that He opens.”

Attending a Christian university has led Stuckey to leadership opportunities beyond the track and field.

“It wasn’t just about being here for track. I joined a ministry group on campus during my sophomore year. I’ve also been looked at as a guy people look up to, but I didn’t think I was somebody that others would want to help lead them closer to God,” Stuckey said.

He also says meeting other students from various backgrounds and cultures has enriched his experience.

Champion, who was born with cerebral palsy, was nervous about how she would be received by others in college due to her disability, but upon arrival to Samford, she knew she had found a home.

“The acceptance and the love and the empathy that you get here, I was never the girl in the chair. I was always Morgan and I was pushed to be the best that I could be in the most loving and caring way possible,” Champion said. “Christian colleges truly do mean being surrounded by good people who know you and who care about what you can bring to the world.”

Champion, who graduated from Samford with a degree in religion and is now a Master of Divinity student at Samford's Beeson Divinity School, says her journey in Christian higher education has only strengthened her faith.

“My identity as a disabled person has been impacted so much through my college experience and it’s because of the support I’ve had here and the provision of the Lord,” Champion said. “No matter who you are or where you come from, you are going to find the support here and you are going to be encouraged to put your light into the world.”

“It is an honor to share our students’ experiences and highlight how attending a Christ-centered university has helped them learn, grow and succeed,” said Betsy Holloway, vice president of marketing and communication at Samford University. “The relationships and bonds formed between students and faculty at Samford is a special and unique aspect of Christian higher education. We are thrilled to be part of the CCCU’s ‘Journey to Distinction’ campaign and help emphasize the benefits of attending a Christ-centered university.”

The Journey to Distinction campaign was developed by a group of communication and enrollment leaders at CCCU member institutions across Christian higher education. Launched in March, the initiative features 10 videos and a campaign website highlighting student stories of faith-integrated learning and living. These stories will be shared globally, through social media, broadcast and print media. To view more videos and read about other students’ experiences, visit the Journey to Distinction website.