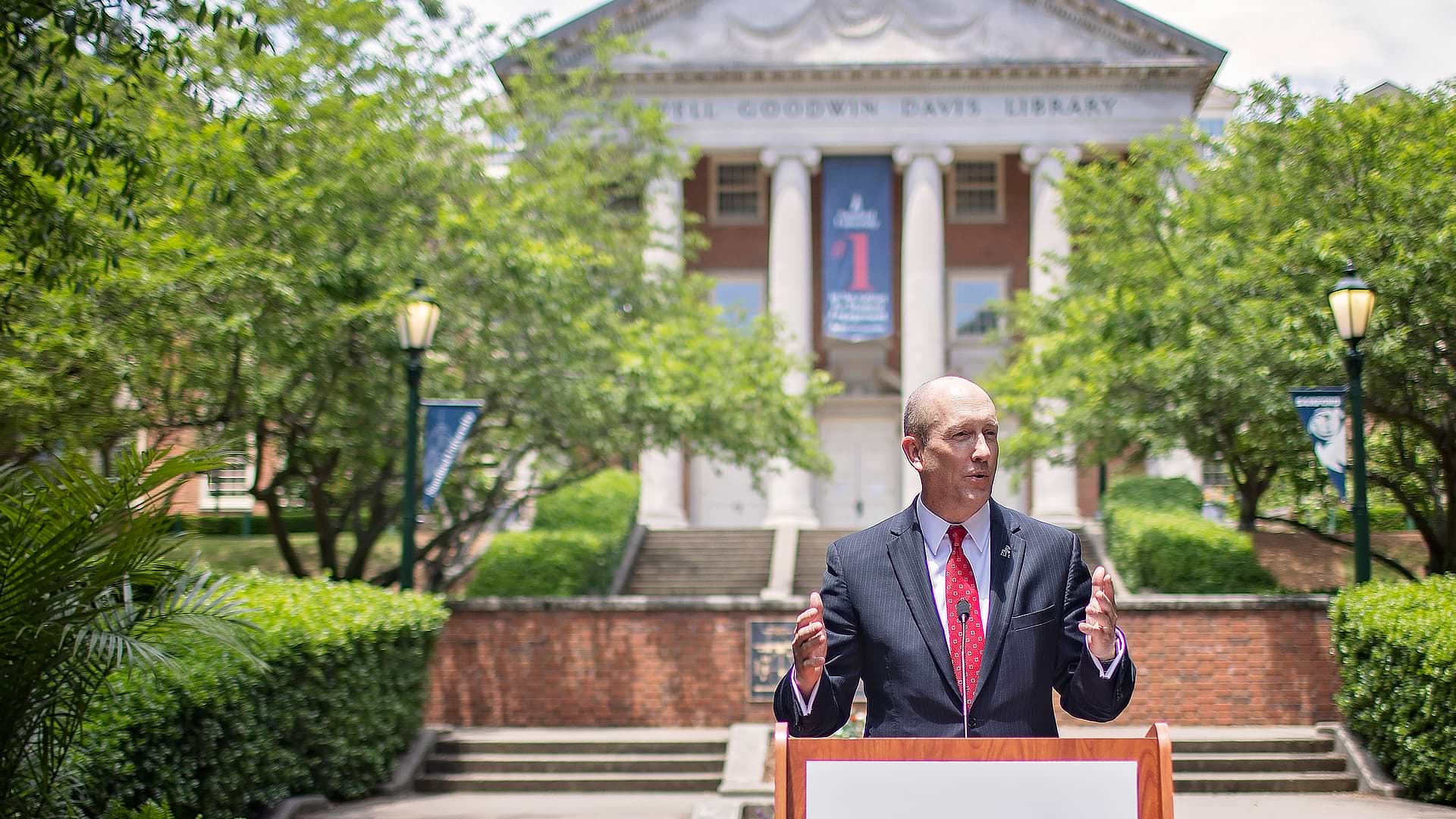 BIRMINGHAM, Alabama - Samford University today announced a transformational $100 million gift—the largest gift to the university by a single donor and the largest gift ever made to a higher education institution in the state of Alabama by a single donor. Funding for the generous donation comes from the estate of Marvin Mann ’54, who passed away on March 19. According to Mann’s wishes, $95 million will go toward endowed student scholarships and $5 million will go to support the Frances Marlin Mann Center for Ethics and Leadership, which was established by Mann in 2008 in honor of his late wife, Frances.

“Marvin Mann’s generosity to Samford is unmatched in the institution’s history books. This is a truly transformational gift that will fulfill Marvin’s desire for more students to have the life-changing opportunities he had as a student and to strengthen the university for the future.”

Mann, a first-generation college graduate and native of Springdale, Alabama, understood the meaning of hard work and treasured the value of his Samford education. Having grown up in the Great Depression, he began working at four years old, candling eggs at his grandfather’s distribution business. After graduating from Samford in 1954, he worked for IBM for 32 years and went on to found Lexmark International, Inc. in 1991 where he served as chief executive officer and chairman until 1999. He was named Samford’s Alumnus of the Year in 2004 and received an honorary doctorate in commerce from the university in 1993.

“My father occasionally told stories of hitchhiking to and from Samford during the 1950s, so he must have highly valued his experience there, especially considering the effort he had to go through to attend,” said Mann’s son, Jeff Mann. “It’s obvious that my father revered Samford University and its community. For anyone to provide a gift that represents decades of hard work, leadership and successful investing he must have had full confidence in the leadership and future of the institution.”

The gift is expected to provide approximately $3.75 million annually to support and expand access to individuals seeking a Samford education. Including both undergraduate and graduate programs, over 100 students will benefit each year. Mann’s vision extends Samford’s legacy of financially supporting academic opportunity; during the 2021-22 academic year, the university funded nearly $75 million of scholarships for its students.

“Together with the Board of Trustees, members of the University Council, and with input from many of Samford’s stakeholders, I look forward to developing plans to strengthen the university’s ability to attract high-caliber students from a variety of backgrounds, for whom a Samford education would be financially out of reach without important scholarship support,” Taylor said. “Access and affordability remain two of the largest opportunities Samford has to extend its reach to more students and families. These funds will allow us to come alongside students who want to attend Samford in new and exciting ways while also reaching new populations of prospective students for whom Samford will be a great choice for their educational needs.”

While the majority of the gift will go toward student scholarships, $5 million will go to the Frances Marlin Mann Center for Ethics and Leadership, which Mann established in 2008 in memory of his beloved wife, Frances. The center is an endowed, university-wide unit that promotes student development and enriches teaching and scholarship in the university’s 10 academic schools. It provides resources to students, faculty, staff and Alabama nonprofits in order to promote the understanding and practice of positive character and servant-leadership. The $5 million will be added to the center’s current endowment to sustain and strengthen Samford’s emphasis on virtue and character formation.

“Teaching students how to succeed in the world of business is no longer enough,” Mann said in 2008 when the center was announced. “They must also enter their careers with a complete understanding of the connections between performance, ethics and leadership.”

Mann was a beloved member of the Samford community. Aside from being named Alumnus of the Year, he was also the first recipient of the university’s Ethics-in-Business Award in 2006. The award, which was later renamed as the Marvin Mann Ethics-in-Business Award, recognizes individuals who embody professional achievement and personal integrity, who display an uncommon commitment to leadership through service, and who have left their marks of influence on institutions and industries without compromising Christian virtue or charity.

With this generous, historic and record-setting gift, Samford will continue to honor Mann’s legacy through modeling his commitment to scholarship, leadership and service to others. For those interested, learn more about giving to Samford.